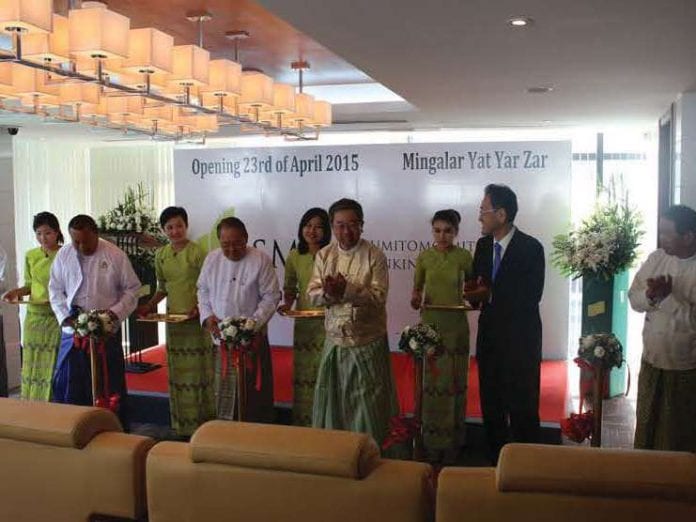 SMBC vice chairman Hiroshi Minoura spoke at the opening ceremony of the bank’s 400-year history, and their established position in the Japanese market.

SMBC has entered into a partnership with KBZ bank, allowing for lending in both foreign currencies and Myanmar kyat.

SMBC will invest $75 million in their Myanmar operations, in line with the minimum set by government authorities.

They have initially employed 30 locals, joined by 6 Japanese expats.

Nine foreign banks were given permission to open branches in Myanmar, but these are still under some restrictions, only able to lend money to foreign businesses or domestic banks, not to Myanmar citizens or businesses directly.

Minoura was keen to emphasize SMBC’s intention to connect with Myanmar, making a short speech in Myanmar language.

Like the two other banks opening last week, they started operations on the astrologically important Yatyarzar day, seen as an auspicious time to open a business.

The result of many mergers, SMBC is the second largest bank in Japan, with branches worldwide.