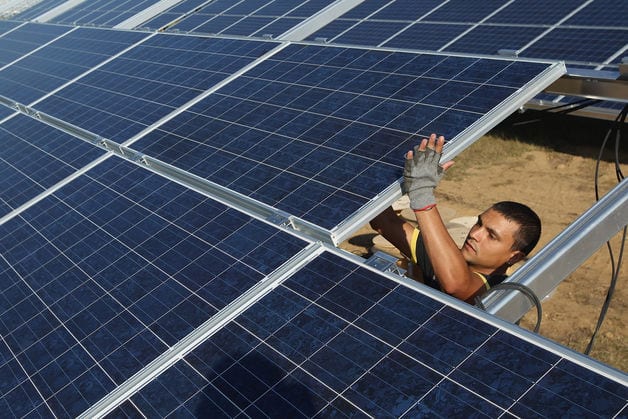 Delegates from energy companies and research institutions around the world convened at the Myanmar Green Energy Summit in Yangon from August 5-6 to explore the prospect of solving the problem of Myanmar’s limited electricity access through the use of green energy technologies.

“Myanmar is a resource-rich country with immense development potential. It is located between two mega-countries, India and China. Most of Myanmar is in greenfield condition, and the central [electricity] grid will not spread to remote areas for at least ten years. So green energy is the best way forward,” said Dr Abdul Aziz SA Kadir, chairman of Confexhub Group, which organised the summit.

Kadir also stressed to the audience that green energy could be a strategic driver of sustainable growth in Myanmar, help cut carbon emissions and reduce poverty among Myanmar’s people.

Many of the speakers expressed their optimism about the idea of placing green energy at the center of a national strategy to broaden electricity access across Myanmar’s population.

“We possess a latecomer’s advantage. We have to avoid others’ mistakes and learn from their failures,” said Maung Maung Hlay, vice president of UMFCCI.

He said expanding access to electricity would alleviate poverty, create jobs and help assimilate Myanmar into the ASEAN economic community.

U Aung Khaing, chairman of the Yangon Electricity Supply Board (YESB), said that only 31 percent of Myanmar’s total population currently has access to electricity, but the government has pledged to increase access to 50 percent by 2015.

This, he said, would be an achievable goal since demand by local and international investors for electricity has grown by 23 percent since 2013.

While these speakers hoped to generate excitement by discussing Myanmar’s growing demand for electric power, other speakers complicated the conversation when they addressed the issue of supply.

Gauri Singh, a director for the International Renewable Energy Agency (IRENA), said although the Myanmar government has pledged to derive 15-20 percent of its electricity from renewable sources by 2020, there are still significant administrative barriers to achieving this goal.

Much of the summit was dedicated to explaining how renewable energy is generated in other parts of the world, and speakers did their best to make those stories relevant to the context of Myanmar. The oft-repeated message of these lectures was that Myanmar still have a long way to go.

“Asia has 60 percent of all the dams and reservoirs in the world,” said Michel De Vivo, secretary general of the International Committee for Large Dams (ICOLD).

“Myanmar has 200 existing large dams and a hydropower potential of 46,000 megawatts. But less than 7 percent of the infrastructure necessary to harness this energy is built today,” De Vivo said.

However, the summit did not ignore Myanmar’s few success stories in the field of electrification. U Soe Moe, an executive engineer for YESB, recounted the success of a rural electrification and irrigation project in Twante township, which has reduced electricity loss in the area from 23.7 percent to 11 percent by upgrading transmission lines. He also said a pilot project in Hlaing Township has reduced loss from 26 percent to 3 percent.

Some speakers noted that while upgrading transmission lines is a good solution for areas connected to Myanmar’s central grid, much of the country lives in off-grid villages, and constructing transmission lines to reach them would be both costly and slow. So, even when Myanmar’s electricity generation problems are resolved, there will still be large gaps in power distribution.

One popular response to the question of distribution was the option of installing off-grid solar photovoltaic panels to power individual homes. These offer a safe alternative to kerosene lamps and can increase rural productivity by extending work hours beyond sundown.

“Off-grid solar PV panels can pay themselves off in five or six years and can offer sixteen to seventeen years of free electricity,” said Evan Scandling, the Southeast Asia regional director for Sunlabob Renewable Energy.

Ramsundersingh also advocated for rapid construction of energy infrastructure, even to the extent of bypassing government regulations.

“Don’t wait for the consultants to come. There’s no need to wait to change the law. If we all think it’s impossible, nothing will happen. Work together on projects, not on 150-page long documents.”