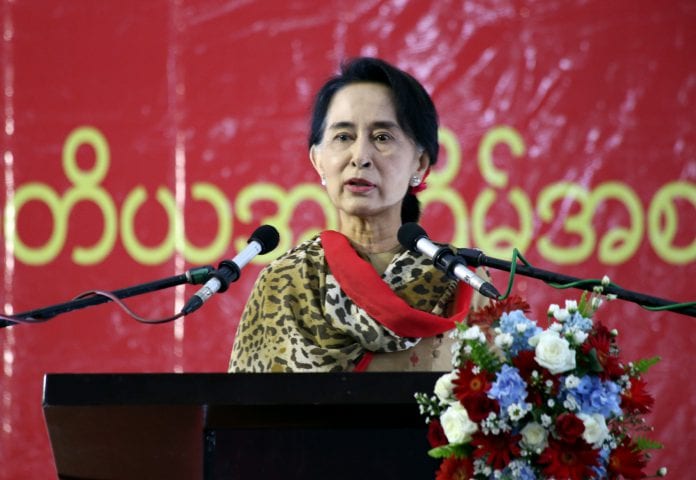 Nobel laureate Aung San Suu Kyi put her political future in the hands of the people of Myanmar on Monday, saying that a parliamentary panel vote to retain a key constitutional clause was intended to bar her from running for the presidency.

A parliamentary committee tasked with recommending amendments to the constitution in Myanmar has refused to change a provision that bars anyone married to a foreigner or with children of foreign citizenship from becoming head of state.

Suu Kyi's late husband was British, as are her two sons.

"I do believe the constitution was written with me in mind," the 68-year-old opposition leader told reporters in Nepal. "This is of course unacceptable democratically speaking that one person should be targeted by … the constitution.

"Whether or not I become president in future depends on the will of the people."

Suu Kyi met with Prime Minister Sushil Koirala and other leaders during her three-day visit to Nepal during which she offered prayers at Lumbini, the birth place of Lord Buddha, in west Nepal.

Most experts believe the relevant clause was written into Myanmar's 2008 constitution expressly to sideline Suu Kyi, whose resistance to military rule, most of it from house arrest, won international renown.

Suu Kyi and her National League for Democracy (NLD) have been pushing for constitutional change ahead of next year's election, mainly to reduce the political clout of the military, which ruled Myanmar for 49 years until a nominally civilian government led by retired generals took office in 2011.

The committee picked to assess amendments has only two NLD members on it and is comprised mainly of lawmakers from the ruling Union Solidarity and Development Party (USDP), created from a movement of a similar name set up by the former junta.

A vote in the bicameral legislature to change the basic law to allow Suu Kyi to become president is still possible, although political analysts say it is highly unlikely it would be passed because the military and its USDP allies dominate parliament.