Suu Kyi to Australia: Smart Money’s On Us 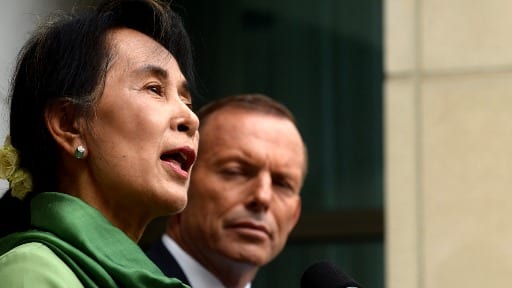 Aung San Suu Kyi has issued a clarion call to Australia’s political leaders: take a punt on us.

The Myanmar presidential hopeful and National League for Democracy leader has used an address in Sydney to call on foreign governments to take a long-term view of her country as it works to shed the vestiges of a brutal military regime.

She says she understands the impulse for governments to try to bolster relations with entrenched power, but the smart money is on her pro-democracy party.

“I think many governments, not just the Australian government, generally like to get on with whoever happens to be in power at the moment,” she told an audience, including business giant Frank Lowy and NSW Premier Barry O’Farrell, at the Lowy Institute on Thursday last week.

“But as I said it’s better to look to the long run and after all, aren’t Australians supposed to be rather inclined to take risks?”

There were laughs as Australia came in for a gentle ribbing from the Nobel laureate: “Aren’t you supposed to be a rather daring, reckless, young nation?

“You must be very daring and very reckless but at the same time it would be very, very sensible of you to put your bets on us.”

Suu Kyi urged foreign investors to consider the good of her country, which has only recently allowed elections.

“I know that when business invest they invest because they expect to make a profit,” she said.

“(But) you cannot divorce economics from politics, and I would like Australians investing in Burma to promote the right kind of political policies, that our country as well as their business might prosper.”