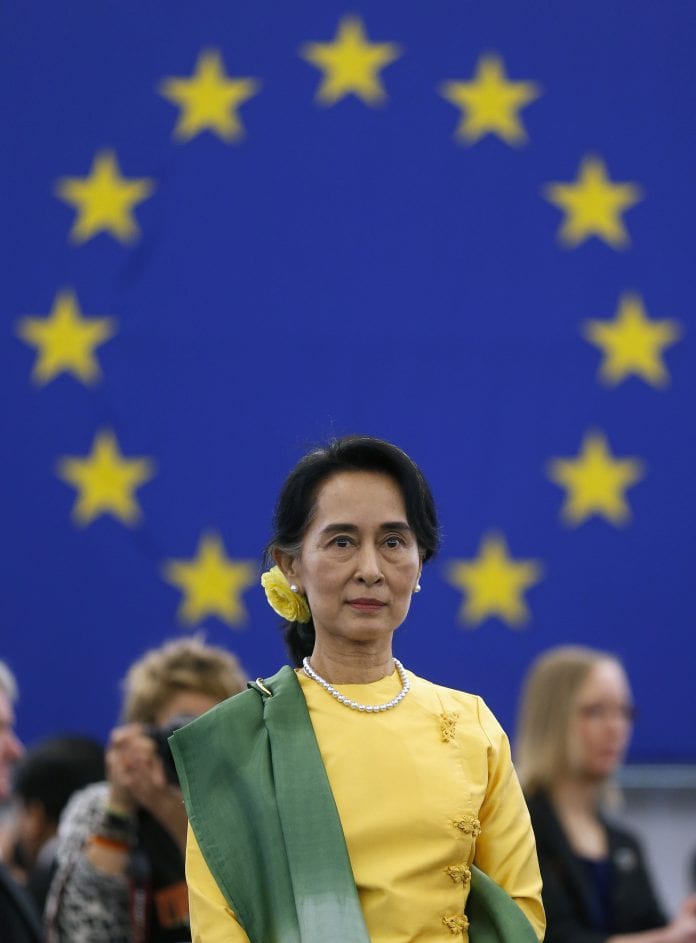 Opposition leader Aung San Suu Kyi has called on foreign investors to encourage the government to establish rule of law in the country and change the constitution, which she says will go a long way toward securing their investments in Myanmar as it emerges from five decades of military rule.

“Anybody who encourages business or investment or any other activity in Burma, while at the same time totally ignoring the need to amend the constitution, is not pragmatic,” she said to a packed room at the Union of Myanmar Federation of Chambers of Commerce and Industry’s (UMFCCI) headquarters in Yangon at the opening of the EU delegation’s visit.

Under the 2008 constitution, which was implemented under the former military regime, anyone who is married to, or has had children with, a foreigner – namely Suu Kyi who had two sons by her late husband Michael Aris – is ineligible to become president. It also guarantees a quarter of parliamentary seats for the military, a provision which has been met with opposition from a number of civil society groups, many of whom are calling for a move towards a federal system.

In a rare sign of political aggression, Suu Kyi criticised Minister for the President’s Office U Soe Thane formentioning nothing about the constitution in his opening speech at the event. U Soe Thane replied that he had done so in order to save time.

Suu Kyi also urged any businesspeople interested in investing in the country to do so in a sensible and sustainable manner.

“I want good, hard-headed businessmen who are intent on making a good profit for themselves, but in a responsible way so that we also may benefit from your presence,” said the Nobel Peace Prize laureate.

Suu Kyi said: “I won’t say invest in Burma and your investment will be protected, but help us to protect your investment,” suggesting that a change to the constitution would stabilise the country further, making foreign investments more secure.

“We want businesspeople to not come in blind, come in with your eyes wide open. You want to invest? Help us to create an environment to protect your investment.”

At the Yangon event, Suu Kyi and Ashton held a meeting with civil society groups, which was closed to the press.

In her opening speech, Ashton spoke of her pleasure at the reforms that have been underway in the country since President Thein Sein’s quasi-civilian government came to power in 2011, adding that the role of the task force is not merely a one-visit project, but that it will continue to take place in different guises in future.

She added that the task force would bring together businesspeople, politicians and civil society groups to help the country develop further.

U Soe Thane thanked the EU for their cooperation in helping Myanmar emerge from 50 years of stagnation, while calling on the international community to be patient as the country edges its way tentatively towards reform and genuine democracy.

“I would ideally like to change 100 policies overnight, but we know we cannot act too quickly. We must move assertively but at the right pace. Please help us to manage our expectations,” he said.

“We will not be perfect. Work with us, help us and share your knowledge. Regardless of the steepness of our path, we have already made good progress.”

Corporate Social Responsibility (CSR) and sustainable investment have been buzzwords ever since the international business community began emerging on Myanmar due to the huge economic rewards on offer. Vicky Bowman, from the Myanmar Centre for Responsible Business, spoke candidly about the situation for businesses investing in the country.

“Scrutiny on businesses operating here is further greater than almost anywhere in the world. We see CSR not as a philanthropic element, but more as the responsibility of companies and their impact on society.”

She added that, in order to operate as a business, issues still remained with regards to transparency and trust.

“There is very little trust between people and the government. People don’t trust authorities, people don’t trust businesses. Businesses must engage directly with communities. When you don’t, you end up with the sort of problems that you’ve seen in the copper mine recently,” Bowman added, referring to the China-backed Letpadaung mine in Sagaing region, which has been met with vehement local protests and led to huge delays.

Also at the event, the EU revealed that, subject to approval from the European Parliament and the European Council, EU support to Myanmar could increase up to $120 million per year, which will go into sectors such as rural development, education, governance and peace building.

“The development taking place in Myanmar is unprecedented and needs to be acknowledged,” said Andris Piebalgs.

“But we must not forget about the challenges ahead, for which the EU, as one of the main donors, will stand by with further support to continue the necessary reforms in the country.”