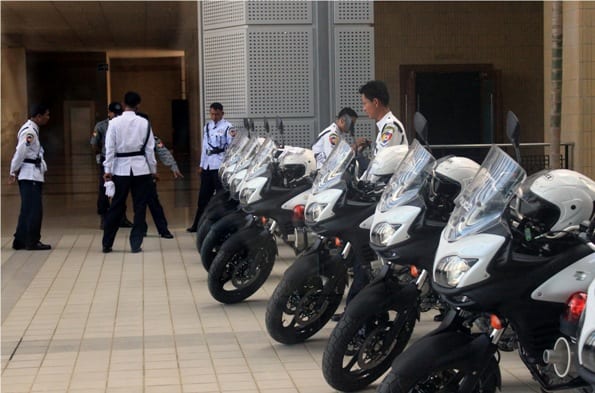 The motorbikes will be used as security vehicles for ASEAN leaders who will attend the ASEAN summit next year, and to control law and order during the SEA Games which will be held from December 11-22, officials said.

Myanmar’s police chief Zaw Win said, “This donation will help our police force maintain security during the regional summits. We will also procure more motorbikes [for the force] and distribute them in townships around the country.”

These Suzuki bikes were presented at a ceremony at Myanmar International Convention Centre in Nay Pyi Taw. The ceremony was attended by government officials while Toshihiro Suzuki, executive vice president of Suzuki Motor Corp, presented the bikes.

Suzuki entered production of automobiles via its subsidiary Suzuki Myanmar Motor Co Ltd in May this year wherein motorcycles ranging from 110 to 125cc are all imported into the country and distributed by its local dealer.

Toshihiro said: “We are planning to manufacture motorbikes and luxurious cars in Myanmar, and also looking into producing accessories for cars and motorbikes.

“After surveying the motorbike and car market in Myanmar, we will decide what type of motorbike to manufacture here.”