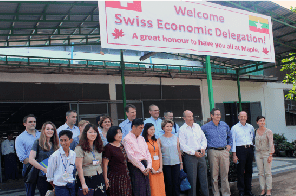 A Swiss business delegation visited Myanmar last week, where investors from the Central European country assessed business opportunities and met businesspeople in the Southeast Asian nation.
Headed by Swiss State Secretary for Economic Affairs, Marie-Gabrielle Ineichen-Fleisch, the delegation visited the Union of Myanmar Federation of Chambers of Commerce and Industry (UMFCCI), met with government representatives in the capital Nay Pyi Taw before a final visit to factories on the outskirts of Yangon to observe business operations within the country.
“This is the first Swiss economic mission to Myanmar. The role of the delegation is to make them aware of the opportunities as well as the challenges they would face in terms of doing business in Myanmar,” Ineichen-Fleisch told Myanmar Business Today.
“The companies we have here are from those industries where Switzerland is naturally strong – that is pharmaceuticals, construction, machinery, as well as service industries and food processing,” she added.
“We have seen that Myanmar is opening up to foreign investment and cooperation with other countries and we think we are a good partner for them.”
In January this year, Switzerland and Myanmar signed their first Memorandum of Understanding (MoU) with regards to trade, investment, labour and trade.
The delegation visited Nay Pyi Taw on Tuesday last week to hold the first round of dialogue on those issues with Dr Kan Zaw, minister for National Planning and Economic Development.
“It’s been a good overview to see how the country works and what the challenges are of operating within Myanmar,” said Angela Di Rosa, Southeast Asia Consultant for Switzerland Global Enterprise.
“With regards to Swiss Small and Medium Enterprises (SMEs), I think it is still too early [to move into Myanmar],” she said.
“SMEs need strong infrastructure, they need human resources and those things are not ready yet.”
For larger Swiss companies, however, they seem to be encouraged by what they have seen during the visit. Peter Jager, regional director of Swiss multinational pharmaceuticals company Novartis, revealed that the firm is looking at setting up operations within the country, while other entrepreneurs were encouraged by what they saw on the trip.
“I have been positively surprised by the general attitude of businesses and government officials here to be more open and recognising that the past is not the way to follow,” said Reto Senn, regional director of business development for Zuellig Pharma, a pharmaceutical distribution group based in Asia.
“There has been a break with the past – they want progress, they want to listen to people and that mindset is important for investors who are coming in.”
Also during the visit, Switzerland agreed to support Myanmar in improving social and environmental responsibility in the economy. Switzerland is cooperating with the International Labour Organisation (ILO) and the United Nations Industrial Developing Organisation (UNIDO) to improve general labour conditions and resource efficiency in Myanmar’s strategically important economic sectors of textiles, tourism and food processing. Specifically, this entails combating child labour and unsafe working conditions and promoting more efficient use of water, energy and other raw materials in the production process.
Over the next three years, Switzerland will allocate almost $2 million for projects, of which more than two-thirds will be spent on those aimed at labour conditions.
The delegation included Switzerland’s Ambassador to Myanmar, Christoph Burgener, as well as representatives from companies such as Nestle, PricewaterhouseCoopers and Societe Generale de Surveillance SA.
In November 2012, Swiss Minister of Foreign Affairs and Federal Councillor Didier Burkhalter visited Myanmar. During his visit, Switzerland opened its embassy in Yangon. Switzerland then committed to providing humanitarian aid worth about $8 million to Myanmar which will be raised to $20 million in the coming year, and in late 2016, to $35 million.
Switzerland was among the five European countries to which Myanmar opposition leader and parliamentarian Aung San Suu Kyi made a historic visit to in June 2012, seeking political and economic support to back democratic transition in her country.
Switzerland, along with Canada and Australia, are among the earliest countries to have lifted all sanctions on Myanmar in May 2012 with the exception of an embargo on arms.