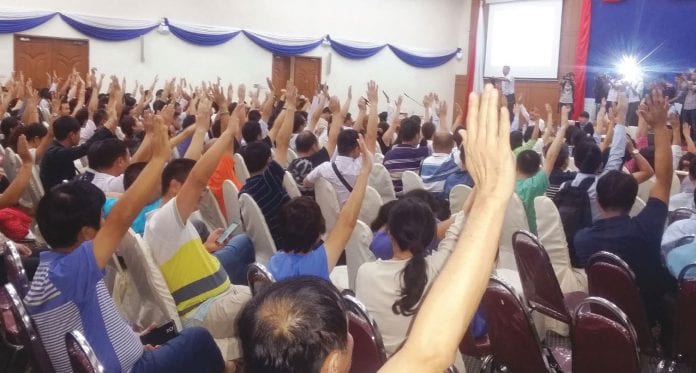 After a national minimum wage was finalised at K3,600 ($3.2) for those working eight hours per day, garment factories have threatened to close in September when the law goes into effect, as announced at a meeting of garment factory employers at the Union of Myanmar Federation of Chambers of Commerce and Industry (UMFCCI) last week.

Daw Khaing Khaing Nwe, secretary of Myanmar Garment Manufacturers Association, said, “We can pay K2,500 per day first. The government should provide support to us. We will try to improve production. Then we can pay a rate more than we do now. We would allow the wages to increase in stages. But we cannot increase wages this much immediately.”

She said that it is difficult for garment factories to deal with the bureaucratic import of raw materials, high price of land, inconsistent electricity, lack of skilled labour, and poor transportation infrastructure. There are over 300 garment factories across the country. Yangon has 30 Chinese-owned garment factories and 60 Korean-owned factories.

U Myat Thin Aung, chairman of Hlaing Tharyar Industrial Zone, told Myanmar Business Today, “The rate defined is a compromise with the wage requested by workers. It is also sufficient for workers. Some garment factories which cannot pay may close. The other industries will pay.”

Others insisted that the wage was still too low. Dr Sai Khaing Myo Tun, member of the Minimum Wage Committee, told Myanmar Business Today, “To answer the question if the rate fits with the requirement of workers, just look at the rising prices. We have continuously requested K4,000.”

The Myanmar Labour Union Association and the Ministry of Labour made a joint survey on the monthly expenditures of workers in villages, wards and townships in previous years. It is found that at least K5,000 is needed per day, according to a presentation at a previous UMFCCI meeting.

The average income of workers from construction, bus lines, and small industries in Yangon typically exceed K8,000 per day. Even street vendors and trishaws can earn that level of income. But workers in garment factories and food production industries in industrial zones get only K1,500 per day. Their salary is K45,000 per month and it can be as much as K100,000 if overtime pay and an attendance bonus are added.

U Myo Aung, secretary of the Ministry of Labour, Employment and Social Welfare, told Myanmar Business Today, “The minimum wage is defined for businesses with more than 15 workers, so this will not apply to many small family businesses.”

He said that the employer who has difficulties paying the rate can negotiate with respective departments or organisations although the rate has been defined. Housing for workers can also be arranged.

The minimum wage was finalised by the Ministry of Labour, Employment and Social Welfare on June 29, and will go into effect after a 60 day transition period, during which the situation is still open to change. The end of the transition period and the threatened shutdowns coincide with the anticipated election in Myanmar, and could add to the potential for unrest.

Objections can be made to the Minimum Wage Committees in each at region and state with strong evidence for the next two weeks and resolved within one month, according to U Myo Aung.