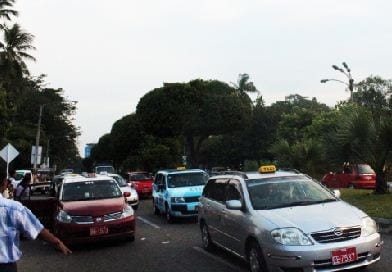 The Yangon Region Central Supervisory Committee for Motor Vehicles this month has started handling the registration and other general paperwork for some 50,000 taxi cabs running in the territory.

The role has been transferred to the committee, also known by its Myanmar acronym MaHtaTha, since October 1 under the directives of the Yangon regional government.

“The number of taxis has overburdened the capacity of YCDC to process and record data and statistics,” said U Hla Aung, chairman of MaHtaTha.

“We have to conduct inspections on city taxis. This commission was set up to only handle buses so we have limited staff. We will try our best to operate fairly with the input of authorities, vehicle owners, drivers and the general public.”

He said the task has been transferred to MaHtaTha as it is experienced in processing and record keeping procedures for taxis.

“This is to better enforce traffic rules and prevent accident risks,” he said.

The regional parliament is also deliberating a law that will enforce regulations over private commercial vehicles.

Before the law comes out, MaHtaTha will handle the taxi regulation and advise the regional government regarding the issue.

The offices also compile taxi data, process vehicle licence extension, business licence extension and all other relevant issues. In addition, the accurate number of deaths and injuries in road accidents involving taxis will be released during this year by MaHtaTha.

“It took four or five hours before to get taxi licence-related issues done. Now that Ma HtaTha has taken the responsibility we should see if the time taken is reduced,” said one taxi driver in Yangon.

Taxis registered in Ayeyarwaddy and Mandalay regions and Shan state are also running in Yangon, U Hla Aung said.