Telenor Sees Less Than $2b Investments in Myanmar 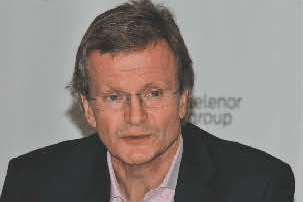 Norwegian telecom giant Telenor will invest less than $2 billion in building its telecoms operation in Myanmar, its chief executive said on Wednesday last week. “It is going to be less than what we invested in total in Pakistan. Some (analysts) have used Pakistan as a benchmark and implied that it could be as much as what we invested in Pakistan, but it will not be,” Jon Fredrik Baksaas told Reuters news agency.

Telenor and Qatari firm Ooredoo in June emerged as the winners of a hotly-contested battle for two 15-year licences to operate telecommunications services in Myanmar.
However, Ooredoo said it will invest about $15 billion in building telecoms infrastructure in Myanmar.