Telenor sheds light on deployment of surveillance tech in Myanmar 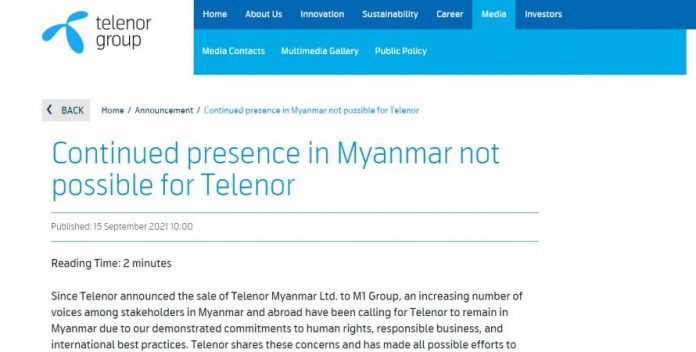 Norwegian telecom firm Telenor issued an announcement today on September 15 hinting at the deployment of surveillance tech in Myanmar by saying that its continued presence would require Telenor Myanmar to activate intercept equipment for the use of Myanmar authorities.

“Having worked actively to avoid activation of intercept equipment, Telenor Myanmar Ltd. has until now not activated this equipment and will not do so voluntarily. Due to well-funded concern for the safety of our employees, we will unfortunately not be able to comment further on the government directive to implement intercept equipment beyond today’s update,” said Telenor in the statement.

Telenor Group sold 100 percent of its mobile operations in Myanmar to the Lebanon-based M1 Group for a total consideration of USD 105 million, of which USD 55 million is a deferred payment over five years. The transaction corresponds to an implied enterprise value of approximately USD 600 million.

Reuters reported in May that the Myanmar military, also known as Tatmadaw, has been using intercept spyware that will allow it to eavesdrop on the communications of citizens. However, the telecom operators did not confirm the use of surveillance technology until Telenor sheds light on the use of intercept equipment.

“Developments since the military takeover made it clear to us that our continued presence would require Telenor Myanmar to activate intercept equipment for the use of Myanmar authorities. The intercept equipment in Myanmar is subject to Norwegian and International sanctions and activation of such equipment is therefore unacceptable for Telenor Group,” Telenor said in the statement.