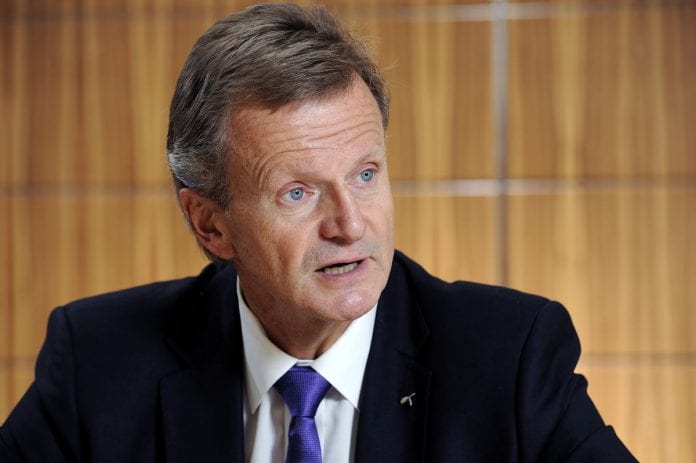 During a visit to Yangon, Telenor Group President and CEO Jon Fredrik Baksaas said that Telenor’s Yangon network is currently “not complete enough,” but the ongoing addition of base signal stations would soon bring an end to incomplete coverage and the rationing of SIM cards.

Baksaas said that the Norwegian firm’s biggest challenges were getting access to land to build signal-carrying base stations, sufficient electricity to power their transmitters and the high traffic volume and concentration of usage hotspots that require further expansion.

He cited the difficult logistics of getting access to base stations in Myanmar, saying, “different working conditions than in Nordic countries” exist in the Southeast Asian nation.

Telenor Myanmar CEO Petter Furberg said that on Telenor’s late September launch it had in Yangon 348 operating stations, which presently surpassed 400, but that creating a complete network will require 800 stations.

The telecoms firm is adding 50 to 100 stations per month in Myanmar’s commercial hub, he added.

There has been significant reselling of Telenor SIM cards on the black market for several times their base value, while many shops in Yangon have run out of cards. Cards bought from official resellers cost K1,500 ($1.5), but the low supply has led to them being sold for as much as K5,000.

However, Furberg said customers can recover the same number in case of losing a SIM card if it was bought from authorised sellers with proper paperwork.

He said Telenor was trying to keep its SIM cards from being sold on the black market, but that there was a limit as to how far they could control the situation.

“We are in a bit of a dilemma. When you go to the shops, they will scream ‘we want more SIM cards,’ at the same time we have our customers, and even the group CEO [Baksaas], saying the network isn’t good enough.”

Without giving an exact figure, Furberg said Telenor has sold “more than 2 million” SIM cards in Myanmar until now.

Taxes have also been a point of contention between Telenor and the government. After Myanmar made moves to tax the telecom industry at 5 percent this April, Telenor entered into multiple discussions regarding collections.

According to Furberg, some competitors are not collecting the tax, leading Telenor to redistribute the taxes in the form of top-up bonuses.

With the rise of the private telecom industry, there has also been an overall data crunch in terms of international communications cables, compounded by the issue that foreign content providers have yet to locate data centres inside Myanmar.

Currently, Telenor leases capacity from MPT on two cables – one to China and one to Thailand – but the telecoms firm is in the process of constructing its own cable into Thailand to ease reliance on its competitor, Furberg said.