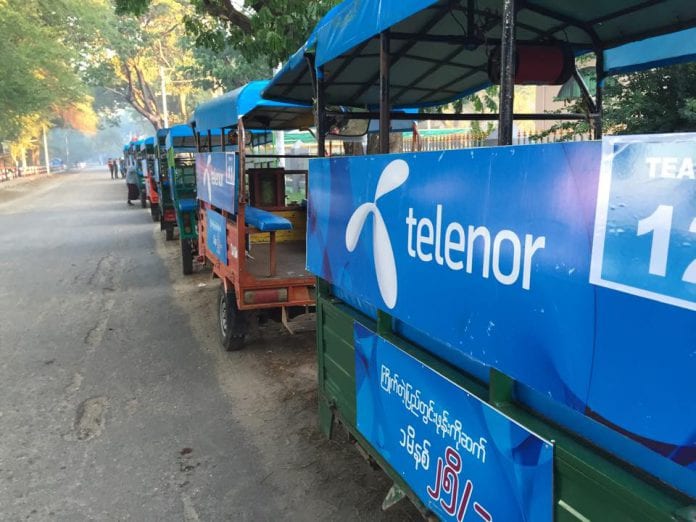 The mobile operator also announced that it will release 1.5 million new SIM cards into the market each month to “satisfy the demand for Telenor connectivity,” according to a statement.

This is Telenor Myanmar’s first expansion of its network in 2015. In 2014, Telenor switched on its networks in three major cities of Myanmar – Nay Pyi Taw, Yangon and Mandalay.

Telenor said with these latest additions it is “one step closer” to its target of offering services in 50 percent of Myanmar’s townships by end of February.

“Next month we will expand to Kayin and Mon and with that be present with our network in nine key areas of Myanmar, including states, union territory and regions,” said Petter Furberg, CEO of Telenor Myanmar.

He said the firm is “working hard” to improve the quality in the areas already switched on, and is confident that people will experience both improved voice and data connection.

“We have decided to release 1.5 million SIM cards to the large number of townships we now serve,” Furberg said.

While switching on new townships, Telenor also claims that it is close to finalising its fibre link to Thailand and expects to open it in February.

“The connection will significantly improve our internet connectivity for the whole country and is critical for our ability to grow our customer base.”

Furberg said in Yangon Telenor has increased the number of towers to 523 from 348 at launch in October, while in Mandalay the number has currently gone up from 70 towers in September to 235.

“Many more towers are needed in the big cities as well as smaller ones to improve the quality particularly indoor. Over the coming three months we expect people to notice significant quality improvement,” he said.

In Bago, Telenor started operating with 108 towers to support seven townships in East Bago, while it has also set up 800 sales points in the region to secure accessible products and services for the mass market, including two franchise shops. More towers will be finished soon to aid Telenor’s rollout in the region, the mobile carrier said.

Telenor switched on its network in Magway with 60 towers. Currently, services are available in Magway township with plans to expand to six more townships within this month. In Magwe Telenor has 1,100 point of sales including two franchise shops.

Taungoo saw the switching on of mobile coverage for nine townships with 16 towers. The residents will have access to Telenor services from 642 shops available in town.