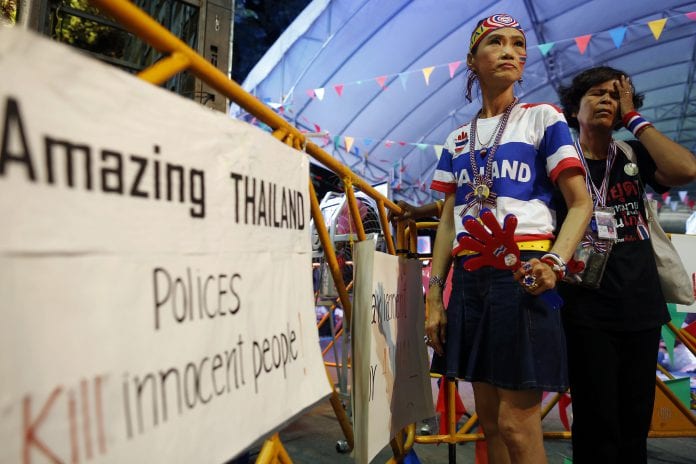 “We are investing more in ASEAN and less in Thailand, where we focus on high value-added products,” Siam Cement chief executive Kan Trakulhoon said.

CP Foods told the summit how it is targeting 75 percent of company revenue to come from foreign operations within the next five years, up from 65 percent currently.

“Growth in emerging countries will surpass the domestic market,” said chief executive Adirek Sripratak, noting his company plans to expand in nearby Philippines and Vietnam.

On Friday, there was another piece of gloomy data on the Thai economy, as factory output fell for the 11th straight month in February, by 4.4 percent compared with a Reuters poll forecast for a 3.5 percent drop.

For months, the outlook for growth has worsened even though officials hope exports – which account for about 60 percent of the economy – will rise and lift the economy this year.

The central bank recent-ly cut its 2014 economic growth forecast to 2.7 percent, compared with 4.8 pct last October, just before anti-government protesters took to the streets to seek the removal of Prime Minister Yingluck Shinawatra.

A decision earlier this month by the Constitutional Court to annul the result of the Feb. 2 general election has plunged the country into political limbo, raising fears that the economy will struggle to pick up speed anytime soon.

That political uncertainty has been weighing on foreigners who invest in Thai securities. A March 14 research note from Nomura showed foreigners have been net sellers of Thai equities this year, with net sales of $837 million. Indonesia and Philippines by contrast have seen net purchases by foreigners of $1.01 billion and $171 million, respectively, so far in 2014.

“If I look across the region, I would say there are better prospects than Thailand right now until we get some sort of resolution to the political overhang that remains there,” Andrew Swan, head of Asian equities at the world’s biggest money manager BlackRock Inc, said.

Political unrest could also threaten the country’s credit rating, which all three major rating agencies currently have on a stable rating of BBB+/Baa1, in the investment grade category.

“If ongoing political uncertainty continues to drag, the country might be on a watch list,” Ng Kheng Siang, head of Asia Pacific fixed income at State Street Global Advisors, which has just over $2 trillion in assets under management, told the summit.

Some corporates in South- east Asia are generally overlooking Thailand in favour of the faster-growing markets of Myanmar and Cambodia, as well as further afield in Asia.

Singapore’s Oversea-Chinese Banking Corp, Southeast Asia’s second largest lender, said that despite a fall in valuations in Thailand, it has little appetite to make any acquisitions there at present.

The chief executive of PT Astra International, Indonesia’s largest listed company by market capitalisation, said it anticipates that Southeast Asia’s largest economy could overtake Thailand as the region’s biggest auto market within two years. Thailand is also a major production base for international auto manufacturers, but Indonesia is hoping to supplant it in coming years.

Thailand’s troubles are hurting its investment numbers. In the first two months of 2014, pledges from foreign investors were 43 percent lower than a year earlier – and those from Japanese investors were down 63 percent.

“FDI this year may be less than $8 billion, the average long-term rate, because manufacturing FDI will disappear quite a bit as investors are waiting to assess the situation,” said Pimonwan Mahujchariyawong, an economist at the Kasikorn Research Center in Bangkok.

However, some portfolio investors still see opportunities. The $12 billion Templeton Asian Growth Fund, run by emerging-markets investor Mark Mobius, increased its allocation for Thailand to 27.12 percent in February, up from 24.7 percent at the start of the year, according to data from Lipper.

That’s a bet economists believe could still pay off in the long-term, with Thailand’s proximity to Myanmar, Vietnam, Laos and Cambodia.

“Its integration into manufacturing supply chains around the region suggests that FDI flows will remain positive in the medium term,” said Benjamin Shatil, an economist at JPMorgan in Singapore.        Reuters