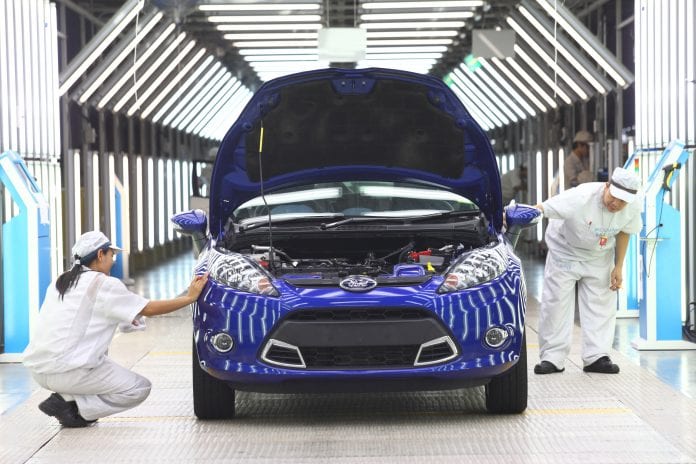 Thailand’s auto production and domestic auto sales continued to fall hard in March following the end of the government subsidy for first-time buyers.

March production was down 29 percent from a year earlier, to 181,334 vehicles, the Federation of Thai Industries’ Automotive Industry Club reported. The decline accelerated from February’s 24 percent pace, though production in March was higher than in February by 4.5 percent.

In addition to the end of the government’s incentives for first-time car buyers, “the decrease in March was also due to disappearing purchasing power as the political turmoil and sluggish economic conditions continued to weigh heavily on consumers’ minds,” said club spokesman Surapong Paisitpatanapong.

Consumer spending power has been eroded by high household debt, which was the equivalent of more than 80 percent of gross domestic product at the end of 2013. The delay in government payment to farmers participating in the multibillion-dollar rice subsidy program has also contributed to the decline in spending.

Domestic auto sales in March were down 47 percent from a year earlier, according to the auto club’s report – but up 17 percent from February, a boost attributed to the promotional power of the Bangkok International Motor Show, which started at the end of March.

In 2013, domestic auto sales fell 7.7 percent to 1.33 million cars and are forecast to drop by 13.6 percent this year, according to Toyota Motor Thai Unit.

In addition, Thailand’s auto exports hit a six-month high in March, with 113,313 vehicles shipped to overseas markets, up 8.8 percent from a year earlier and up 17 percent from February as auto makers decided to increase production for export.

Thailand is a regional vehicle production and export base for the world’s top car manufacturers.