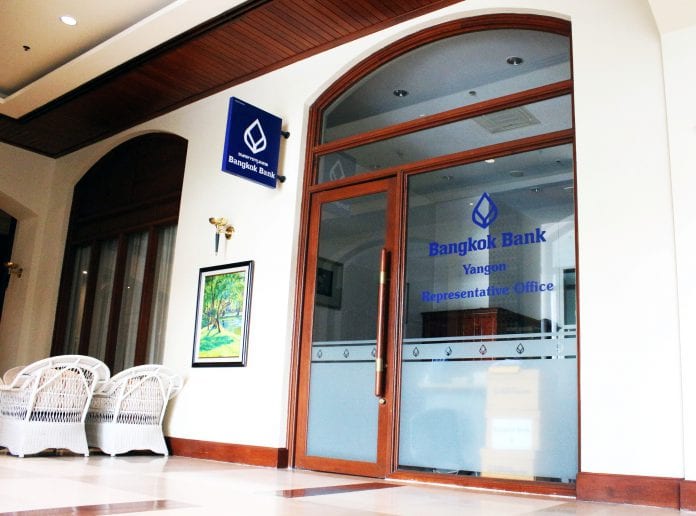 Thailand’s big banks are hitching a ride on the caravan of Thai companies departing for new growth centres in the Greater Mekong region, which includes Myanmar and southern China, as a chill in retail lending drives them to look outward for long-term growth.

“Expanding in foreign markets where we are not familiar has some risks,” Chaiyarit Anuchitworawong, executive vice-president of Bangkok Bank, said.

“But if our clients go first and we follow them, this will help reduce some risks.”

Thai direct investment in Myanmar, Cambodia, Laos and Vietnam rose to $936 million last year, the highest since the 2008-09 global crisis.

At stake for Thai entrepreneurs – and Thai banks – is a chance to grow in a combined economy almost the size of Thailand’s.

The formation of a single market in Southeast Asia, planned to begin in 2015, also raises hopes of freer capital flows and expectations of higher demand for banking services.

Success for Thailand’s banks will depend on how quickly they can beef up their presence. Any stalling in domestic loan and deposit growth due to the prolonged and severe downturn in the Thai economy or a sharp drop in the banks’ substantial capital reserves will challenge their plans, analysts say.

Kasikornbank plans to nearly double its staff in Southeast Asia and China next year, after investing $40 million in a new branch in Laos opening in December, its president Teeranun Srihong said.

SCB aims to hire up to 50 staff in Myanmar, Cambodia, Laos and Vietnam over the next three to five years as the bank sets up the infrastructure for corporate banking, said Kamalkant Agarwal, head of its international banking business.

Bangkok Bank, which has the biggest foreign operation among Thailand’s big four banks with international lending comprising 16-17 percent of total loans, plans to open a branch in Phnom Penh this year. It is also the only Thai lender with a banking licence in Myanmar.

“We do not expect to see strong growth in the near future, but it’s an opportunity that will boost organic growth for Thai banks,” said Adisorn Muangparnchon, a Bangkok-based analyst at Phillip Securities.

“Risk will be limited, given most Thai banks are following Thai companies expanding in the region.”

Bankers have voiced concerns about compliance and regulatory uncertainty, especially in Myanmar. But Thai companies remain upbeat about the region.

“Economies have a very strong potential with average growth of 7 to 8 percent a year. Myanmar’s (energy drink market) has grown 150 percent in the past year,” said Sathien Setthasit, CEO of Thai energy drink maker Carabao Group.

Political unrest and a military coup this year have slowed Thai investment in the region. In the first nine months of 2014, direct investment in Cambodia, Laos, Myanmar and Vietnam fell 13.46 percent to 20.4 billion baht ($619.87 million), Bank of Thailand data published on November 28 shows.

The political upheavals have also disrupted a decade-long Thai credit boom. Non-performing consumer loans have soared to a four-year high as households struggle to pay back debts, slamming the brakes on private demand and leading the World Bank to cut Thailand’s economic growth forecast to the lowest in Southeast Asia.

To be sure, Thai banks are far better capitalised today with bigger buffers against bad loans compared to the 1997-98 financial crisis. The capital adequacy ratios of the country’s big four lenders range from 15.85 percent to 18.7 percent.

Now is their chance to look outward, analysts say. Competition from regional players in the domestic banking scene is also intensifying, building a case to diversify.

“Those countries are undergoing several infrastructure projects, giving Thai companies an opportunity to get orders and operate in those countries,” Kittiya said. (Reuters)