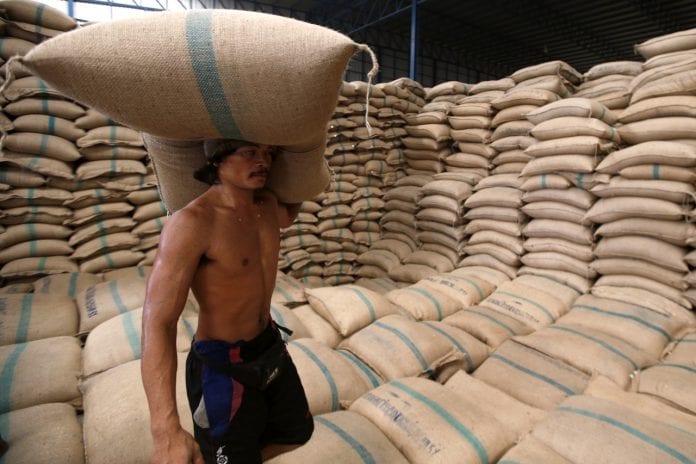 The Thai government will issue a 75 billion baht ($2.38 billion) bond to help fund a rice subsidy scheme that has not paid out to farmers since October 1, a delay that risks alienating key supporters of Prime Minister Yingluck Shinawatra.
The government has in recent weeks been facing the biggest protests since it swept to power in 2011 as its traditional foes from the urban elite step up their opposition.
But now it faces the prospect of a traditional bastion of support – farmers – joining the anti-government protests over the failure to pay them for their rice.
The government has been buying rice at 15,000 baht [$1 = 31.5 Thai baht] a tonne, well above market prices, but it has struggled to sell enough to keep the subsidy scheme afloat.
Thousands of farmers have complained that they have not been paid, according to the Rice Farmers Association.
“They are very angry and many of them have already joined a mass rally against the government in Bangkok,” Prasit Boonchoey, head of the rice association, told Reuters.
The Commerce Ministry has said it will spend 270 billion baht to buy 16.5 million tonnes of rice in the year that started in October. But since then it has taken 2 million tonnes of rice, worth about 30 billion baht, without paying for it, according to the state-backed agricultural bank that funds the scheme.
Farmers have been among the biggest backers of the government, largely because of their support for Yingluck’s brother, populist former premier Thaksin Shinawtra, who has been in self-exile since 2008 but is now eyeing a return.
The farmers’ willingness to join the recent anti-Thaksin protests is a measure of their anger.
Some farmers said they would block traffic in their areas in protest to press for payment, an echo of action by rubber farmers in September. Others said they would march to Bangkok.
“My group will go to Bangkok to ask the Commerce Minister why we’re not paid,” said Vichien Phuanlamjiak, head of a farmers’ group in Ayutthaya province, a major rice area north of Bangkok.
A government spokesman declined to comment on the late payments.
The government will issue a three-year bond worth 75 billion baht to raise funds for the rice-buying scheme, a senior official at the Finance Ministry’s Public Debt Management Office (PDMO) said last week.
“The bond will be offered for the public by November so that we can raise funds on time as farmers have started harvesting,” said PDMO deputy director Suwit Rojanawanich.
Bangkok has spent 680 billion baht on rice since October 2011, but has only sold enough to get 156 billion baht to pay the Bank of Agriculture and Agricultural Cooperatives (BAAC) for the loans that fund the scheme.
“We did not decline to pay the farmers, but we have some glitch with the legislative process that is beyond my authority. It needs to be approved by the cabinet,” said Supat Eauchai, a BAAC vice-president.
The government set aside 82 billion baht from the 2013/14 fiscal budget to offset losses from its agricultural subsidy schemes, of which 50 billion baht could be used to meet outstanding payments, a finance ministry source said.
BAAC loans to pay for the subsidy scheme are guaranteed by the Finance Ministry, which is balking at backing more because the Commerce Ministry has not sold enough rice to repay the outstanding debt, the finance ministry source told Reuters.
Thailand has struggled to cut its massive rice stockpiles, estimated at 15 million tonnes. Earlier claims of rice sales to China and other countries were greeted with scepticism by traders because there was no evidence of shipments.
The International Monetary Fund last week called on Thailand to scrap the rice subsidies and scale back on other fiscal stimulus measures in order to balance the budget and contain rising public debt.
“They just told me the government has no money. I’m concerned I won’t earn a living,” said Kitti Boonraud, 38, who farms 6 hectares of paddy. He said he had not been paid for 20 tonnes of rice sold to the government since October. Reuters