Thai PM Stands by Investigation into Murders of British Tourists 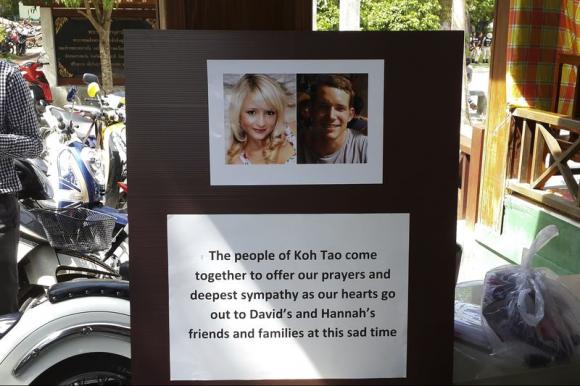 Thai Prime Minister Prayuth Chan-ocha defended a police investigation into the murder of two British tourists on Friday, amid criticism of shoddy forensic work and concern that two arrested Myanmar men may have admitted the crimes under duress.

Zaw Lin and Win Zaw Htun, both 21, were arrested last week for the murders of British backpackers Hannah Witheridge, 23, and David Miller, 24.

The bodies were found on a beach on the southern island of Koh Tao, or Turtle Island, famous for its coral reefs and diving. Post-mortem examinations by Thailand's forensics department showed that Miller died from drowning and blows to the head while Witheridge died from severe head wounds.

The killings have hurt Thailand's vital tourism industry, which accounts for 10 percent of gross domestic product. The country is under martial law after a May coup and tourism is struggling to recover from months of political protests

"I would like the media to stop speculation and let investigators do their work," Prayuth told reporters after landing back in Bangkok following a two-day visit to Myanmar.

"We must build foreign confidence and make Britain and other foreign nations understand. They might be a little surprised why the criminals were caught so quickly. I myself was excited.

"I want all Thais to stop and think that authorities have procedures in place. Nobody would dare catch the wrong person because this is a case of big international interest."

Police said the arrested men had confessed to the crime – despite the fact that the two had yet to appear in court to face any charge and speak for themselves.

Around 10 protesters gathered in front of City Hall in Myanmar's capital Yangon on Friday during Prayuth's visit to the city calling for a fair trial.

"I would like to urge our government to put pressure (on Thailand) and get help from the international community so that the real story can be found out," said rights activist Nay Myo Zin.

Myanmar President Thein Sein met Prayuth on Thursday and urged him to offer the suspects as much protection as possible.

"The entire people, the media and the civic society in this country are watching this issue very attentively," Thein Sein said, according to an official in the president's office.

"I would like to ask for justice and fairness in handling this case. It is also concerned with our bilateral relations. Of course they should be liable to punishment if they are really guilty, but the trial should be based on fairness and justice."

Responding to Thein Sein, Prayuth said: "They are not the culprits yet. We will handle this case with special attention, very fairly, so that we can win the trust of Myanmar people and the international community."

The inquiry has been dogged from the outset by contradictory statements by officials. Police were widely accused of bungling the investigation, including chasing the wrong leads and failing to seal off the crime scene quickly enough, and pressure grew for them to solve the crime quickly.

The suspects' lawyer, Aung Myo Thant, has called the case a "set-up". He was not available for comment.

On Thursday Khunying Porntip Rojanasunan, director-general of the Central Institute of Forensic Science, questioned methodology used in the case.

"The weak point (in the investigation) is that police do not understand that the case requires a forensic pathologist," she was quoted as saying by the Bangkok Post English-language paper.

Police have strongly denied allegations of abuse during the investigation and have stressed the importance of DNA evidence in the case. DNA found on Witheridge matched samples taken from the two men, police said.