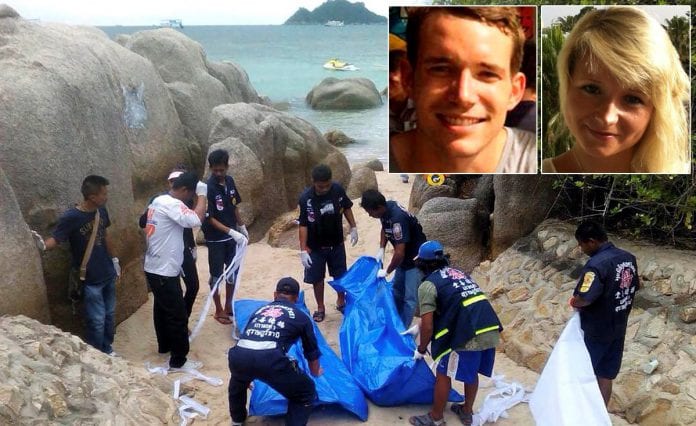 Thailand's police chief defended on Tuesday the arrest of two Myanmar men for the murder of two British tourists amid concern the pair may have admitted to the murders under duress.

The bodies of Hannah Witheridge, 23, and David Miller, 24, were found on a beach on the southern island of Koh Tao, a normally tranquil spot famous for its coral reefs and diving, last month.

Miller died from drowning and blows to the head, while Witheridge died from severe head wounds, examinations by Thailand's forensics department found.

The killings have dented Thailand's image as a happy-go-lucky holiday paradise and come after the tourism industry, which contributes almost 10 percent of gross domestic product, was already battered by months of political protest, a May 22 coup and military rule.

Police were widely accused of bungling the investigation and pressure grew for them to solve it quickly.

Last week, police said two Myanmar workers had admitted to killing the tourists and that DNA found on Witheridge matched samples taken from the two men.

"I insist that all officials in this case have done a good job. A perfect job," national police chief General Somyot Poompanmuang told a news conference in Bangkok.

The suspects, who have been identified only as "Saw Rim" and "Win", both 21, have been charged with the murder of both Britons and the rape of Witheridge.

If found guilty, they could face the death penalty.

But a lawyer contracted by Myanmar's embassy in Thailand to defend the suspects said the case was a "set-up and not based on hard facts", according to the Democratic Voice of Burma, an independent Myanmar news organisation based in Norway.

"From what we have learned, there are inconsistencies with both the forensic report and evidence provided in the case," the lawyer, Aung Myo Thant, was quoted as saying.

Police stressed the importance of their DNA evidence.

"DNA found on the deceased's body matches the suspects," said Police Major General Suwat Chaengyodsuk, the officer who led the investigation. "This is something that cannot be denied."

Police said a mobile phone belonging to Miller was also found on Saw. A third Myanmar migrant worker is in police custody but has not been charged.

Some rights groups have voiced concern over accusations of abuse during the investigation.

"A number of serious allegations of physical abuse against Myanmar workers as part of the questioning process in this murder case have been raised to us," said Andy Hall, a rights activist and researcher based in Thailand.

"The accusations do not concern the two or three persons currently detained for the murder. We do not have enough evidence or information at this stage to comment on how or if the two accused have been scapegoated for this crime or not."

Migrant workers often face discrimination in Thailand and have been used as scapegoats for crimes before. But police denied using force during their interrogation.

"I confirm that there was no abuse of any of the suspects," said lead investigator Suwat.

The case will be forwarded to a court on Oct. 14. Reuters