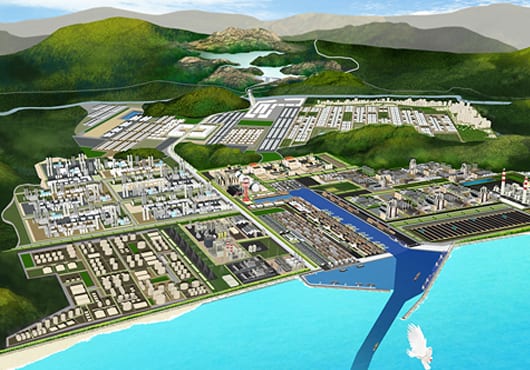 Thailand and Myanmar will sign a pact in January aimed at reviving the multi-billion dollar Dawei industrial zone in Myanmar, a Thai minister said.

Deputy Transport Minister Arkhom Termpittayapaisit, who is also secretary-general of the National Economic and Social Development Board (NESDB), said the Thai and Myanmar governments would meet to kickstart what is arguably Southeast Asia’s most ambitious industrial zone.

“At the start of January 2015 the Thai and Myanmar government will sign a Memorandum of Understanding (MoU) to move forward the Dawei special economic zone,” he added.

He said he hoped Italian Thai Development Pcl and Rojana Industrial Park Pcl would play a role in the first phase of the project.

The Dawei Special Economic Zone complex, a 250-sq-km (100-sq-mile) deep-sea port, petrochemical and heavy industry hub, is located along the slim Thai-Myanmar peninsula and was described by ITD as “the new global gateway of Indochina”.

The project has been stuck in a quagmire for years. Delays were largely blamed on ITD, which had failed to secure private investment and agree on a power source for the complex.

Arkhom said foreign players, including Japan, were ready to get involved in Dawei, but did not give further details.

Located in southeastern Myanmar with highway links to Bangkok and Thailand’s eastern seaboard, Dawei is set to be Southeast Asia’s largest industrial complex when complete.

The industrial zone would be a potential boon for firms relying on the transport of goods around the crowded Malacca Strait, the world’s busiest shipping lane. (Reuters)