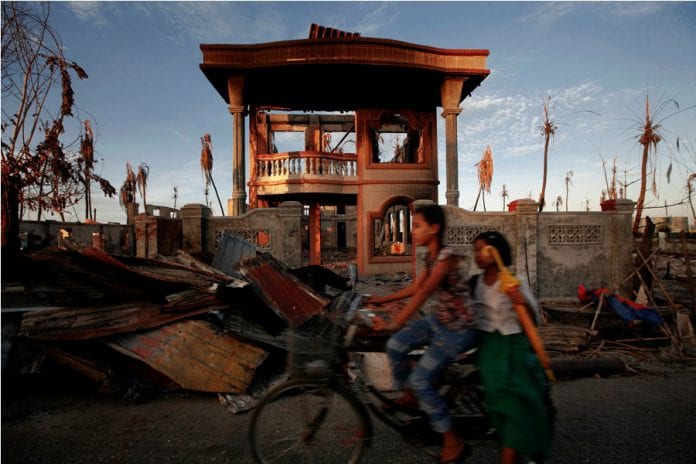 On a little-known island in Myanmar’s Rakhine state, construction is soon set to begin on a deep-sea port, dozens of factories, roads, reservoirs and a power plant to support large-scale industrial activity. Alongside similar projects in Dawei and Thilawa, the Kyaukphyu Special Economic Zone is one of Myanmar’s most ambitious and expensive development strategies.

Despite repeated assurances from policymakers in Naypyitaw and Beijing, the economic justification of the Kyaukphyu SEZ is coming under increased scrutiny. Located in Rakhine state, one of the poorest and least developed regions in Myanmar, Kyaukphyu township is a sleepy provincial centre. Home to only 60,000 people, many of which rely on fishing and agriculture for their livelihoods, there is, as of yet, no industrial infrastructure of note. Yet a tract of land several miles from the town centre is set to receive unique legal status, billions in infrastructure spending and, if all goes according to plan, large flows of job-creating investment. While the area has some notable natural assets such as large gas deposits and a well-protected harbour, the zone’s prospects of success are poor.

So why was Kyaukphyu chosen over more established ports such as Pathein and Mawlamyine? Essentially it is the strategic concerns of the previous government which are to blame. Strategy hawks in Beijing, fearful of an embargo in the Malacca Straits, desired an alternative route for Middle-Eastern oil and gas to supply Chinese industries. Thus in order to open up the “western seaboard” of China, a 741-kilometre long Sino-Burmese oil and gas pipeline was proposed alongside a Kunming-Kyaukphyu railway. These investments, along with China’s strong influence in Naypyitaw, prompted the establishment of an SEZ at the pipeline’s origin where petrochemical and related energy processing could take place before being transported to China.

Since 2011, however, the geopolitical environment has changed considerably. Myanmar has transitioned to a quasi-civilian government, normalised relations with the West and experienced a boom in non-Chinese foreign investment. Because of these developments, an SEZ at Kyaukphyu now makes little economic sense when locations in other cities would be cheaper to build and more attractive to investors. There are four major reasons why Kyaukphyu’s SEZ is likely to fail.

To begin with, the Kyaukphyu township will be unable to provide essential business services for foreign investors. At present, only the most basic financial, legal and logistical expertise is currently available, shortages which will drive up costs and cause unnecessary delays. Complementary services will hopefully develop in coming years, but for now there is little support for potential first-movers.

Secondly, Rakhine state is a powder-keg of unrest and instability. Long-simmering tensions between the predominantly Buddhist majority and Muslim minority culminated in 2012, resulting in arson attacks and episodes of communal violence causing hundreds of deaths. Tragically, the Muslim quarter of Kyaukphyu township itself was burnt down and the town’s remaining Muslim inhabitants now reside in military-protected camps. While anti-Islamic sentiment and violence is in evidence throughout Myanmar, recent conflict has been concentrated in Rakhine state and the current situation remains extremely volatile.

Thirdly, like Dawei, Kyaukphyu is isolated and disconnected. The near-impassable Arakan Mountains and tropical climate make the windy dirt-road connections with the interior slow and unreliable. Flights are infrequent, telecommunications limited and qualified tradespeople are increasingly difficult to find. Due to the town’s limited resources, supplies of water, electricity and roads will all need to be increased as a result of the SEZ, outlays which will increase the costs of the scheme dramatically.

Finally, the Chinese contribution to Kyaukphyu is in serious doubt. Having lost much of its leverage over Naypyitaw, China may reassess some of its earlier infrastructure and investment promises of the pre-reform era, greatly reducing the zone’s likelihood of success. According to one Myanmar official, the Kunming to Kyaukphyu railway has been “cancelled” after three years of inaction, a claim hotly disputed by the Chinese Ambassador to Myanmar. The oil and gas pipeline’s long-term future is equally unclear. Recent protests in Yunnan Province have led the construction of new oil refineries to be delayed until at least 2016.

Because of these reasons the Kyaukphyu SEZ is unlikely to succeed and the spending of more taxpayer dollars simply cannot be justified. While a small number of firms may find reason to invest once construction is complete, the number is unlikely to be sufficient to justify the enormous costs of transforming a rural township into an industrial city.

Josh Wood was a Visiting Research Fellow at the Myanmar Development Resource Institute’s Centre for Economic and Social Development (MDRI-CESD) and is a postgraduate student at the ANU. Views and opinions expressed in this article are the author’s own and don’t necessarily reflect Myanmar Business Today’s editorial opinion. The article was first published at New Mandala and has been reprinted here with the author’s permission. The final part of the series will be published next week.