The EU and ASEAN: Natural Partners 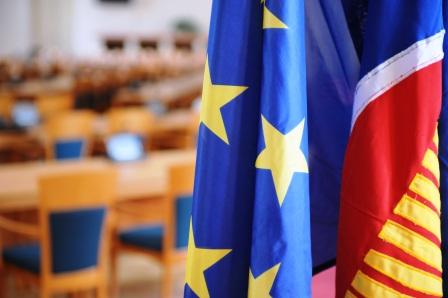 Every day, news headlines in South East Asia draw attention to the region's impressive economic achievements. However, they increasingly focus on growing security tensions, including those in the South China Sea. The EU supports ASEAN in the twin challenges of integrating the region's economies and addressing growing threats to security. That is why, on 23 July, Foreign Ministers from 28 EU Member States and 10 ASEAN countries will gather in Brussels to discuss how the EU-ASEAN partnership can best deliver shared security and sustainable prosperity for people in both regions.

Just one look at the flight schedules between Europe and South East Asia – from Frankfurt to Singapore, Brussels to Bangkok, London to Hanoi  –  is enough to demonstrate the depth of the EU's partnership with ASEAN. Every year, 10 million people travel between our two regions, and this vibrant exchange between our societies forms the basis of our growing cooperation.  Together, our regions are able to drive global trade, tackle organised crime and promote safer seas.

It is of little wonder that our societies have become increasingly interconnected: after all, the EU and ASEAN are the world's two major initiatives for promoting regional integration. Our organisations have been working together to advance peace and security at home and abroad for almost four decades.

Economic ties between the EU and ASEAN have traditionally been strong. Trade between our regions has increased every year since 2009. The EU is the biggest foreign investor in ASEAN, and close to a third of all foreign investment from abroad comes from the EU. With further economic integration in ASEAN anticipated from 2015, these numbers are likely to increase even further. The strength of our economic ties has also inspired us to develop closer links in other areas. Two years ago in Brunei, Foreign Ministers from both regions decided to advance EU-ASEAN cooperation into a more ambitious, political direction.

More than any other ASEAN partner, the EU is committed to promoting peace and development through regional integration instead of power politics. As an organisation which has brought lasting peace among our member states after centuries of conflict, we understand the strategic importance of shaping regional solutions better than anyone. We also know how difficult these solutions can be to achieve. This is why sharing experiences and best practices is such a central aspect of the EU-ASEAN partnership.

To confront challenges that transcend borders, such as climate change or maritime security, cooperation between nations is not just common sense, but a strategic necessity. Today, conflict, terrorism or crime in one part of the globe can influence the well-being of societies in another, and countries must increasingly rely on one another to maintain prosperous and safe societies. Our solution is simple – countries are never stronger than when they act together. Regional cooperation is key to tackling the problems countries face in the 21st century.

Nowhere are the benefits of cooperation more evident than in Myanmar, which this year took on the ASEAN chair for the first time in its history. Since the new civilian government embarked on a historic transition in 2011, the EU has been able to significantly strengthen its bilateral ties with Myanmar:  politically, we have opened a new chapter with the lifting of restrictive measures. Trade and investment between our two economies is growing fast. Almost € 1 billion in development assistance has been allocated for Myanmar for the period 2014-2020. EU aid will focus on four key areas over the next six years: education, rural development, good governance and rule of law, and assistance to the country's peace process.

As chair of ASEAN in the year before the ASEAN Economic Community is due to come into force, Myanmar has taken on a leading role in preparing the region for greater integration. Having strong ties with the EU and ASEAN has clearly reinforced Myanmar's own commitment to political reform and promoting economic growth and poverty reduction.

The EU has also been able to extend regional projects aimed at strengthening economic and security infrastructure within Myanmar: one example is the "ASEAN Crisis Centres Project" (ACCP) which has helped to develop a crisis and emergency response architecture across the region. In June 2014, the EU-funded "Myanmar Crisis Response Management Centre" opened in Nay Pyi Taw, allowing Myanmar to better coordinate both nationally and internationally in times of crisis. The centre joins a growing network of Crisis Response Centres and Situation Rooms across ASEAN, demonstrating the importance of regional cooperation in times of crises.

When foreign ministers from EU and ASEAN nations meet in Brussels on 23rd of July they will focus on three concrete steps. First and foremost among these is connectivity:  deepening the connection between and within our societies. In order to bring this about, we want to invest more in transport, education and communication to help bring people together so they can learn, travel and exchange ideas.

Second, we also wish to work together more closely on maritime cooperation. Safe and secure seas in South East Asia are a prerequisite for a stable and prosperous ASEAN. They are also important to the EU, which conducts 90% of its trade by sea. The EU does not take sides on the question of sovereignty. We believe that all territorial disputes should be settled peacefully in a spirit of cooperation and with respect to international law including UNCLOS. The EU also supports the efforts to work on a formal and legally binding Code of Conduct between ASEAN and China, and hopes these discussions can be completed as soon as possible.

Our third priority is development cooperation with ASEAN.  The EU intends to more than double development aid to ASEAN countries to eradicate poverty and sustain the region's dynamic economies. We will be working in tandem with ASEAN governments to ensure EU assistance is closely aligned with their own national priorities.

The EU and ASEAN are also investing in the future of our societies by linking up our younger generations: every year more than 4000 students and scholars from ASEAN come to the EU, providing an important backbone for shared innovation and growth for generations to come.

Four decades of cooperation have made the EU and ASEAN 'natural partners'. As Ministers gather in Brussels, they will be fully aware of how much the EU and ASEAN have already achieved together. They will also understand just how much work remains to be done.

Roland Kobia is the EU Ambassador to Myanmar. Views and opinions expressed here are the author's own and don't necessarily reflect Myanmar Business Today's editorial opinion.