Home Entertainment The Next Big Destination in Mexico 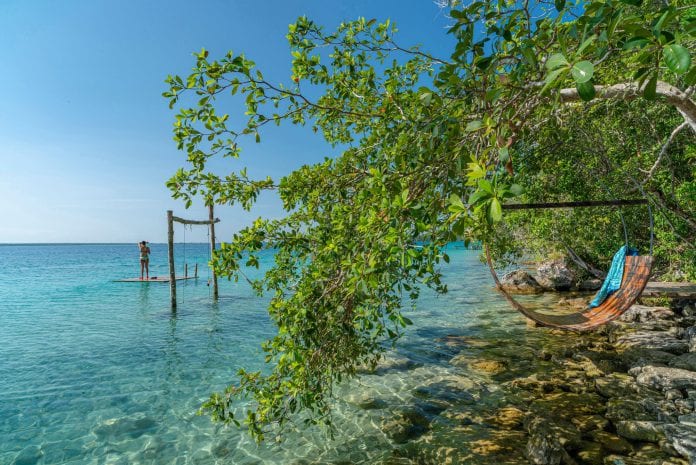 The first glimpse of Laguna Bacalar felt like a mirage, a flash of luminous turquoise through a haze of trees. Twenty-six miles long and just over a mile wide, the “Lake of Seven Colors” snakes through the jungle, carrying tales of Mayan origins and pirate attacks.
The shifting hues, courtesy of the lagoon’s white, limestone bottom, practically demand to be photographed. There are 443,000 and counting #bacalar images on Instagram showing the lagoon from different vantage points, at different times of day, with beautiful people on waterfront swings and boatloads of revelers raising cold beers.
If you look closely, those photos show other things as well: Colors that, while stunning, are already diminished. People standing and walking on stromatolites, ancient life-forms of great scientific significance. Pollution, literal black clouds in azure waters, ignored or unnoticed by those happy couples and families and friends.
Is the lagoon’s otherworldly beauty, its utter Instagrammability, going to be its downfall?

The “Wild West”
Bacalar’s name is thought to come from the Mayan “Bakhalal,” meaning place of reeds. Colonized by the Spanish in the 16th century, it sits just uphill from the lagoon and is centered around a large main square, or zócalo, anchored by the Fort of San Felipe. Sleepy in the humid jungle heat, the town remains compact and walkable; a coast road runs along the lagoon’s southern shore and is easily accessible by car or bicycle.
Fernando Gaza, the owner of Casa Tortuga, came to Bacalar in 2013 from Monterrey, Mexico. The waterfront hostel, which opened that same year, was one of the first on the shores of the lagoon.
“It was this hidden jewel. When you drive from Chetumal to Tulum, or Playa del Carmen, you don’t even see it,” he said. “Most people had just heard about it through word-of-mouth. But even then we would say, ‘How many years until this is like Tulum?’”
Comparisons to Tulum, 133 miles north and the latest example of explosive growth on Quintana Roo’s Costa Maya, are probably inevitable. Like that town, Bacalar has cenotes, natural swimming holes in the limestone rock; early Mayan archaeological sites (Dzibanche and Kohunlich); and, of course, that gorgeous, photogenic water. But Tulum is now also synonymous with thoughtless overdevelopment.
Rapid growth has already hit Bacalar – Garza noticed a major increase in development, and foreign tourists, about three years ago, with new businesses springing up in the last six months.
Some of this change is a boon for travelers. Accommodations in Bacalar range from backpacker-friendly hostels to luxury resorts. Hotels and hostels on the waterfront, by and large, are pricier than those in town.
But an even bigger boom is on the horizon courtesy of the Mayan Train, a 950-mile rail line meant to stretch through the states of Quintana Roo, Tabasco, Campeche, Chiapas and Yucatán, with a dedicated stop in Bacalar, slated to be completed in 2023. With the arrival of the train, Bacalar’s relative inaccessibility – it is a four-hour drive from the Cancún airport – will no longer be a hindrance to even more explosive growth.
“Over the last two years, the market has appreciated 350 percent,” said Ryan Gravel, the owner of the real estate brokerage Buy Bacalar. “Bacalar is new, it’s groovy. It’s the Wild West.” He paused. “But the ecosystem here – it’s so fragile. We could easily destroy it.”

Environmental
Implications
Cenote Cocalitos was quiet when I arrived at 11 a.m.; by noon, the sun emerged and the crowd grew steadily, with visitors piling their belongings under a rickety palapa and gingerly wading into the water down algae-slicked wooden steps.
Some, but not all of the visitors, stopped to read the signs explaining the structure of the cenote, and highlighting the presence of stromatolites, which, according to the Bacalar-based independent biologist Shanty Acosta Sinencio, were the first photosynthetic life-forms on earth. Formed by thousands of layers of calcium carbonate-secreting cyanobacteria, stromatolites resemble giant boulders. Bacalar’s oldest stromatolites are between 7,000 and 10,000 years old.
“These organisms grow in very particular environments and have been found in very few places in the world,” Acosta said. According to the biologist Silvana Ibarra Madrigal, who works with the Mexican government as an environmental assessor, Bacalar is home to the largest known group of freshwater stromatolites in the world.
The stromatolites, and the lagoon itself, are visibly affected by Bacalar’s explosive growth. Much of the issue is structural – the town’s waste treatment facilities are outdated and overcapacity, causing sewage to flow into the lagoon, particularly during hurricane season (the vast majority of households are not connected to the system at all). Garbage collection can be spotty, and separation is nonexistent. But tourists can do damage, too – at the cenote, I saw people slathering on sunscreen before entering the water and clambering on the rocklike structures as they angled for better photos.
Part of the problem, Acosta said, is that environmental care is not prioritized by the local government or among some members of the local population. She said that the lack of long-term planning remains a major hindrance to making meaningful, widespread change, and that organized crime has also contributed to socio-economic deterioration.
Kamila Chomicz, an artist and biologist from Gdansk, Poland, who has worked closely with Bacalar’s activist community, said there is often resistance about making these concerns public, lest tourists be deterred from visiting.

A Different Kind of
Tourism
A growing number of local business owners are trying to inform tourists of the area’s fragility. Rooms at Casa Tortuga and Casa Chukum, a sleek boutique hotel that opened north of the zócalo last spring, have printed materials in their rooms with information about the stromatolites and the best way to interact with the lagoon.
Many of these materials are thanks to Marilina Labat, a local designer who volunteered her services to Dirección Ecología Bacalar, a government organization focused on raising ecological awareness. As of September, the group had set up a large display dedicated to the stromatolites in Spanish and English in the town zócalo. Nearby, at El Manati, a spacious cafe, gallery and shop that offers assistance in booking eco-conscious experiences, information about the lagoon is displayed alongside exuberant artistic renderings of stromatolites. Chomicz put together an exhibition of photos and videos focused on the stromatolites and lagoon last spring, and has since made a short documentary on the same topic.
The mission of Bacalart, a free art festival founded by French artist Catalina Sour Vasquez, is similar. A collaboration between META, Sour Vasquez’s Paris-based artist’s collective and a number of Mexican artists, the first Bacalart held in November combined art exhibitions, musical performances and film screenings at three venues around town – the luxury Hotel Makaabá; Damajuana, a Tulum-based sushi restaurant and mezcaleria on the waterfront; and El Galeón Pirata, a cultural center and music venue.
“Maybe, in addition to raising awareness of the lagoon, we can help bring a different kind of tourist here – people who are interested in art and culture, not just partying,” said the artist and META member Diane Merli.

The Responsible Tourist
It is, undeniably, Bacalar’s moment on the brink. An update to the region’s urban development plan is in the works, the first since 2005. The plan will determine where developers can build, how high buildings can be, how many rooms hotels are allowed to have. It will determine the direction of Bacalar and likely the fate of the lagoon, but it could be years before it is released.
Chomicz hopes that, in the meantime, tourists can help make a difference.
“Limit your waste by using refillable water bottles. Keep the party in the city, not on the lagoon. And ask questions!” she recommends. “Ask about the toilets: Are they connected to the system? How do they treat the wastewater? Ask your guides and boat operators. What do stromatolites look like? How can we take care of them?”