The Unforeseen Risks of a Device to Curb Drunken Driving 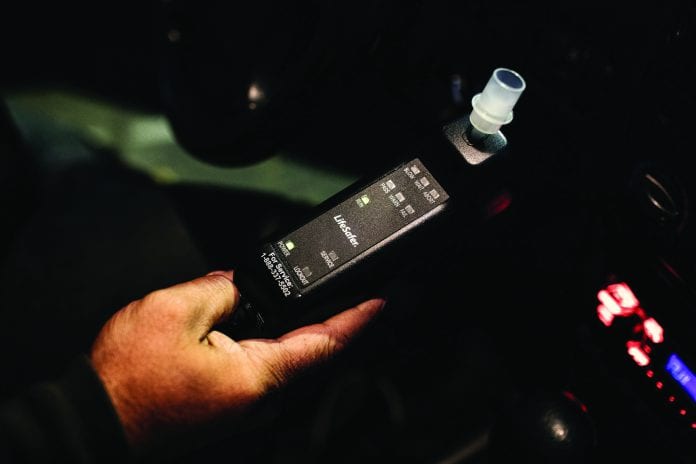 Over the past decade, states have increasingly turned to a powerful tool to stop drunken driving before it starts: Miniature breathalyzers, wired into a car’s electronics, that prevent the engine from starting unless the person behind the wheel is sober enough to drive.
These devices, called ignition interlocks, have been remarkably effective. One study found that states mandating them for all drunken driving offenders had 15 percent fewer fatalities from alcohol-related car accidents.
But while interlocks have prevented thousands of crashes, they have also caused them.
In November 2017, Alexis Butler was backing out of a driveway in Arlington, Texas, when a speeding pickup slammed into her Toyota Camry. The driver, Blake Cowan, had been arrested twice the previous year for drunken driving, but he was sober at the time of the crash, according to police records.
To start his truck, Cowan had to prove his sobriety by blowing into an interlock device, a machine the size of a cellphone, wired to the car’s steering column. But to keep driving, he had to provide additional breath samples to show he hadn’t been drinking on the road.
Those checks, known in the industry as rolling retests, occur at random. They require the driver to lift a hand off the wheel, pick up the device and blow – hard – into its mouthpiece for several seconds. If the driver fails or doesn’t comply, the car goes into panic mode: Its headlights flash, and its horn honks until the driver turns off the engine.
Cowan had just passed a test but dropped his interlock on the floor. Wanting it in easy reach for his next one, he distractedly fumbled for it, he told a police detective – and hit Butler’s car. She died a week later.
Nearly 350,000 people in the United States have interlocks, according to the latest estimate in an annual industry report, up from 133,000 a decade earlier. Thirty-four states require people with drunken-driving convictions to install the devices. That number will no doubt grow; other states are considering similar laws. Two U.S. senators are pushing legislation that would require all new cars to include a version of the technology by 2024.
But the devices’ potential to divert motorists’ attention has drawn little scrutiny, even as states clamp down on other forms of distracted driving, like texting or putting a phone to your ear.
A review by The New York Times of accident reports and lawsuits turned up dozens of examples of collisions in which the devices played a role.

A Lucrative, Growing
Industry
In 2005, New Mexico became the first state to require interlocks for everyone convicted of driving drunk. More than a dozen others soon followed, spurred on by a nationwide lobbying campaign by Mothers Against Drunk Driving.
The organization says its top legislative priority is getting all states to mandate interlocks for every drunken-driving offender. MADD has also called for automakers to include such technology as an option in all vehicles.
“The research showing that interlocks save lives is pretty overwhelming,” said J.T. Griffin, MADD’s chief government affairs officer.
That’s not the only reason they’re an easy sell: States don’t pay. Drivers pay about $75 to have the devices installed in their cars, as well as a monthly monitoring fee that generally runs between $60 and $100. The annual cost of having a device is typically $1,000 or more.
That has created a lucrative industry. Smart Start, based in Texas, estimated its interlock revenue last year at $150 million – nearly double its revenue from four years ago – according to its chief executive. Dräger, a German company that is among the leading manufacturers of breathalyzer machines, now makes twice as much money from interlocks in the United States as it does from its traditional breath-test business. Private equity firms looking to cash in have bought several interlock makers, including Smart Start, and are circling others.
When regulatory warnings about rolling tests have come up, Interlock companies have pushed back.
In 2006, the National Highway Traffic Safety Administration, the federal regulator in charge of setting vehicle safety equipment standards, began revising its 14-year-old guidelines for how interlock devices should work. A 2010 draft of the document said the agency “does not intend” that users perform rolling retests and said they should be performed while stopped on the side of the road.
The interlock industry and others objected, arguing that rolling retests were safe and, that in any case, it was impractical to expect drivers to pull over.
“All interlock vendors advise the client/user to pull off the road in a ‘safe’ place to take the retest,” the president of LifeSafer, a leading vendor, wrote in a letter to the NHTSA. He wrote that the “practical reality” of interlocks was that “99 percent” of retests happened while the vehicle was moving.
The regulator backed down. In its final guidance, published in 2013, it wrote that it was “very concerned about distracted driving” but would not specify how retests should be conducted. The agency also said that was “more appropriately a function for States and local jurisdictions.”
In a statement to The Times, the agency said the devices gave “ample time” to pull over for a test.

Blind Spot
The federal agency’s statement said it had not studied the issue of distracted driving and interlocks. States that mandate them have not, either.
David Kelly, executive director of the Coalition of Ignition Interlock Manufacturers, said his group’s members were aware of very few accidents involving their devices – but he acknowledged that no one was actively looking for them.
“There hasn’t really been much research in this area at all, and part of that is because, from what we understand and the evidence we’ve seen, the distraction issue isn’t really that big of an issue,” Kelly said.
The Times worked with officials in North Carolina – one of the few states that makes most traffic collision records public – to see if interlocks were cited in police crash reports. The review went back 10 years, spanning three million crashes.
In 2017 – when about 11,500 of the state’s drivers had interlocks, according to an industry-funded study – eight crashes were linked to the devices. In all, interlocks were involved in 58 crashes over the 10 years. That is almost certainly an undercount: Not every crash report is logged in the state’s database, and many reports lacked searchable descriptions of the crash’s circumstances.
One driver told local police that he had reached for his beeping interlock, missed a curve in the road and “woke up to someone saying he had been in an accident.” Two drivers rear-ended stopped cars during rolling retests. A fourth driver hit a sheriff’s vehicle. A fifth veered off the road and into a field.

False Positives
Even when interlocks are used safely, sober drivers can end up in legal jeopardy.
The most advanced breath-testing devices are the machines found in many police stations. But they have had reliability problems, including software glitches, poor maintenance and human error. In recent years, courts have thrown out more than 50,000 such tests that were flawed.
Interlock devices use a cheaper and less trustworthy technology, the kind found in hand-held breath testers used in traffic stops. (Such tests are generally not considered reliable enough to be used in court.)
Mouthwash, toothpaste, breath mints and gum can trigger false positives. So can certain foods: Smart Start’s website warns drivers to avoid sugary snacks like doughnuts, cinnamon rolls and chocolate before blowing into their devices.

Lives Changed
Butler never regained consciousness after Cowan crashed his truck into her car. Two months later, he was charged with manslaughter.
Cowan pleaded guilty and was sentenced last month to 16 years in prison. He is haunted by the crash and has twice tried to kill himself, according to his lawyer, Charles Smith.
Butler’s mother, Barbara Barr, said rolling retests should not be permitted. The devices, she said, should give drivers plenty of time to find a safe place to stop – and drivers should be required to pull over.
“We have laws against texting and driving,” Barr said. “They don’t have a law on interlock.”

SourceStacy Cowley and Jessica Silver-Greenberg (The New York Times)
Facebook
Twitter
Pinterest
WhatsApp
Previous articleGetting Back to Nature in a Luxurious, Sustainable Way
Next articleSmoke on the Water and Other Sydney Hobart Challenges