Thousands of Ivory Pieces Illegally for Sale in Myanmar 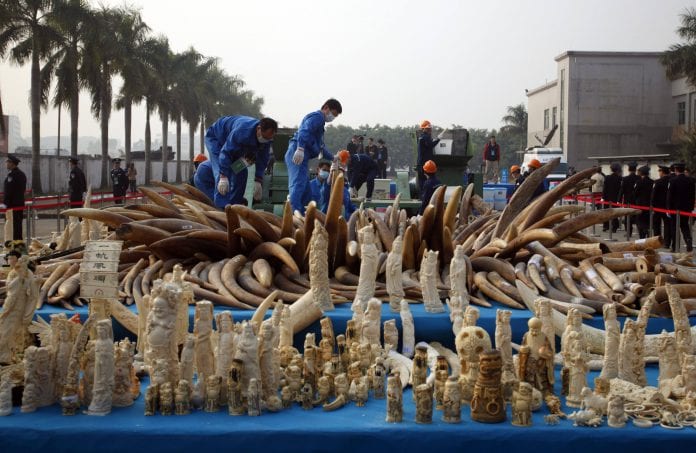 An undercover team from wildlife trade monitoring network TRAFFIC and Oxford Brookes University have found more than 3,300 pieces of ivory and close to 50 raw ivory elephant tusks openly for sale in Mong La, a town on the Myanmar side of the country’s border with China.

The findings come less than a week after China publicly destroyed more than 6 tonnes of ivory in Guangdong, in a display of commitment against the global illicit trade in ivory.

The majority of inhabitants, including ivory vendors, in Mong La are from China, with the currency of daily use the Chinese Yuan Renminbi. The town is visited by large numbers of Chinese nationals, mainly for the seedy nightlife.

According to sources, ivory enters the town from China, mostly already carved. Twenty-seven shops were found offering ivory for sale, most of it likely to originate from Africa, where the carved hippo teeth also on display undoubtedly originated. Several shops were openly showcasing hundreds of carved pieces of ivory in glass display cases.

“Our observations suggest Mong La may be one of the biggest unregulated ivory markets in Asia, and it is doubtless one of those where ivory is most openly displayed,” said Professor Vincent Nijman, from Oxford Brookes University.

It means Mong La could rank alongside markets in Bangkok in Thailand and Guangzhou in China, long-known as centres for the illegal domestic and international ivory trade.

Trade in ivory is largely illegal in Myanmar (there are some authorised trade in the tusk tips of legally-owned elephants) and cross-border trade of ivory is not permitted under guidelines agreed upon by countries that are signatory to the Convention on International Trade in Endangered Species of Wild Fauna and Flora (CITES).

“It is clear that neither Myanmar nor China are effectively enforcing CITES regulations, as ivory is evidently moving across the border,” said Professor Nijman.

Volumes of ivory found in the markets of Mong La were higher than at any point since TRAFFIC first started monitoring wildlife trade in the border town in 2006.

“Increasing volumes of ivory in an open cross-border market catering to Chinese consumers is a sure sign that international agreements are not being enforced and action to reduce ivory demand is not effective,” said Dr Chris R Shepherd, director of TRAFFIC in Southeast Asia.

“However, as the market is situated in Myanmar, it is the responsibility of Myanmar’s authorities to take swift action and close down this illicit trade.”

In 2014 Myanmar is chair of the ASEAN Wildlife Enforcement Network (ASEAN-WEN), a regional inter-agency and inter-governmental initiative to counter the illegal cross-border trade in endangered plants and animals.

Myanmar is one of three countries in Asia, alongside Lao PDR and Cambodia, who have never submitted information on ivory seizures to ETIS (the Elephant Trade Information System), the database on global ivory seizures that TRAFFIC manages on behalf of CITES Conference of the Parties.

“As the current Chair of ASEAN-WEN, there is a huge responsibility on Myanmar to set an example and clamp down on this blatantly illegal trade in ivory,” said Shepherd.

“China must play its part too in helping the authorities in Myanmar carry out this essential enforcement action.”

John Scanlon, secretary-general of the Convention on International Trade in Endangered Species, told a conference on elephant poaching in December, “With an estimated 22,000 African elephants illegally killed in 2012, we continue to face a critical situation. Current elephant poaching in Africa remains far too high, and could soon lead to local extinctions if the present killing rates continue.”

Despite orders from the Central Bank of Myanmar to reopen banks on Monday, private banks remained closed on March 8, 2021.  “Private banks will not...
Read more
Business

March 15, 2021
Gold price in domestic price, reflecting global gold price and dollar rate, lowered after a sudden increase in price following the coup, according to...