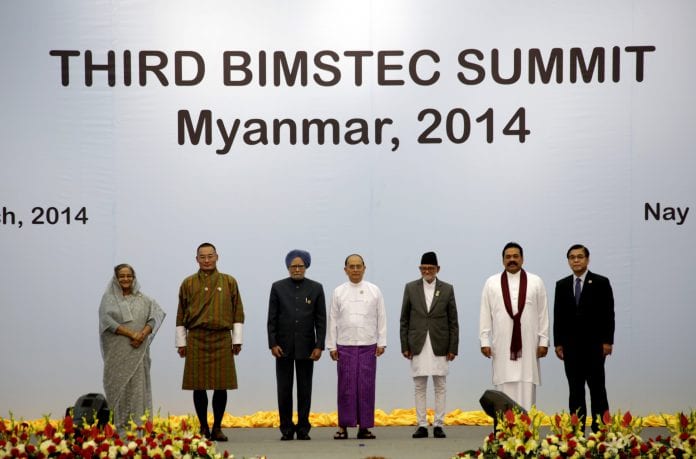 The agreements include two Memoranda of Association (MoAs) and one Memorandum of Understanding (MoU) on setting up BIMSTEC’s Secretariat Office in Dhaka, Bangladesh, a meteorology and hydrology department in Noida, India and cultural department in Thimpu, Bhutan.

President U Thein Sein called on the seven-member regional body to promote development of the peoples of BIMSTEC, urging increasing efforts for a stronger cooperation that will sustain the momentum of the group.

“Our top priority is to alleviate poverty in the region and improve the quality of life and well-being of our peoples,” he said.

He said the member states need to combine their strengths and resources to engage with other international bodies in addressing non-traditional and transnational challenges of climate change, natural disasters, energy and food security.

“Through the collective endeavours and in a spirit of equality and partnership, we will certainly be accelerating economic growth and social progress in the sub-region.”

The member countries – Bangladesh, Bhutan, India, Myanmar, Nepal, Sri Lanka and Thailand – also issued a declaration, which called for expediting the ratification for entry into the BIMSTEC Convention on Cooperation in Combating International Terrorism.

The countries agreed to finalise the draft Agreement on Trade in Goods with General Rules of Origin and Product Specific Rules and also move towards signing the Agreement on Dispute Settlement Procedures and the Agreement on Cooperation and Mutual Assistance in Customs Matters.

The third BIMSTEC summit and its related meetings were held from March 1-4. The First and Second BIMSTEC Summits were held in Thailand in 2004 and in India in 2008. Although Myanmar has assumed BIMSTEC Chair since 2009, there has been a delay in approval by members for Myanmar to host the third Summit. The 13th ministerial level meeting held in Nay Pyi Taw in 2011 approved Myanmar to host the third BIMSTEC Summit and related meetings.