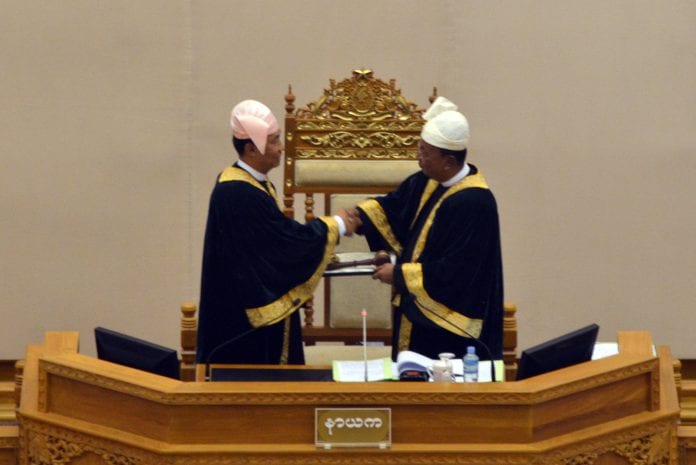 Thura U Shwe Mann, speaker of Myanmar’s House of Representative (Lower House), took over the alternate seat of Speaker of the Union Parliament from U Khin Aung Myint on Wednesday last week.

U Khin Aung Myint’s term of two and a half years in the post expired on the day according to the constitution. But he will retain as speaker of the House of Nationalities (Upper House).

U Shwe Mann, who is also chairman of the ruling Union Solidarity and Development Party (USDP), will run for the remaining two and a half years’ term for the current five-year tenure of U Thein Sein’s government elected through 2010 general election.

The current seventh regular session of the Union Parliament began in Nay Pyi Taw on July 1 along with the separate sessions of the two houses.

The session has so far adopted, among others, a proposal to form a 109-member Constitution Review Joint Committee, represented proportionally by parliament members of both houses, political parties, military MPs and individuals, to make necessary amendment to the 2008 state constitution.

The parliament also sought admission to the Convention on the Means of Prohibiting and Preventing the Illicit Import, Export and Transfer of Ownership of Cultural Property as well as admission to the World Bank’s Multilateral Investment Guarantee Agency – MIGS Convention.

In addition, the parliament endorsed the government’s appointment of the governor and vice governors of the central bank of Myanmar.