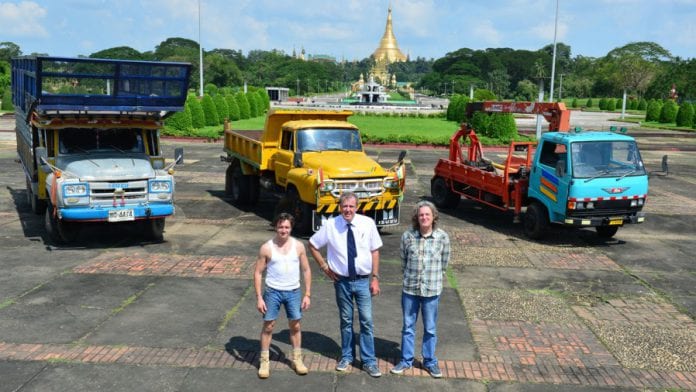 British television series Top Gear’s producer has apologised after broadcasting a “light-hearted” joke by the series’ presenter Jeremy Clarkson that sparked a complaint of racism against the BBC show.

The episode, which was filmed in Myanmar and Thailand and shown in March, featured a scene where the motoring show’s stars built a bridge over the River Kwai and as an Asian man walked over it Clarkson said: “That is a proud moment, but there’s a slope on it.”

The use of the word – which is a derogatory term for people of Asian descent – led to complaints and the threat of legal action from Equal Justice, a law firm specialising in discrimination cases, BBC reported.

Acting on behalf of actress Somi Guha, the firm accused Clarkson of “clear gross misconduct” and said his comments made the BBC appear “institutionally racist”.

The BBC2 show’s executive producer, Andy Wilman, said: “When we used the word slope in the recent Top Gear Myanmar Special it was a light-hearted word play joke referencing both the build quality of the bridge and the local Asian man who was crossing it.”

He said in a statement: “We were not aware at the time, and it has subsequently been brought to our attention, that the word slope is considered by some to be offensive and although it might not be widely recognised in the UK, we appreciate that it can be considered offensive to some here and overseas, for example in Australia and the USA.

“If we had known that at the time we would not have broadcast the word in this context and regret any offence caused.”

Clarkson is well known for courting controversy – in recent years he has been cleared of breaching the broadcasting code by watchdog Ofcom after comparing a Japanese car to people with growths on their faces.

He previously faced a storm of protest from mental health charities after he branded people who throw themselves under trains as “selfish” and was forced to apologise for telling BBC1’s The One Show that striking workers should be shot.

The motoring show has also faced complaints from Indian and Mexican politicians over remarks made about their countries while filming on location. In 2011, the BBC apologised for remarks on the programme that characterised Mexicans as lazy and feckless.

Comments likening the design of a camper van to people with facial disfigurements the following year, meanwhile, were later found to be “not editorially justified” by the BBC Trust.

Clarkson is an English broadcaster, journalist and writer who specialises in motoring. He is best known for his role on Top Gear, and also writes weekly columns for The Sunday Times and The Sun.

Top Gear is about motor vehicles, primarily cars, and is the world’s most widely watched factual television programme. It began in 1977 as a conventional motoring magazine programme. Over time, and especially since a relaunch in 2002, it has developed a quirky, humorous and sometimes controversial style. The programme is currently presented by Clarkson, Richard Hammond and James May, and has featured at least three different test drivers known as The Stig. The programme is estimated to have around 350 million views per week in 170 different countries.

It has received acclaim for its visual style and presentation, and criticism for its content and often politically incorrect commentary made by its presenters. Columnist AA Gill, close friend of Clarkson and fellow Sunday Times columnist, described the programme as “a triumph of the craft of programme making, of the minute, obsessive, musical masonry of editing, the French polishing of colourwashing and grading.”