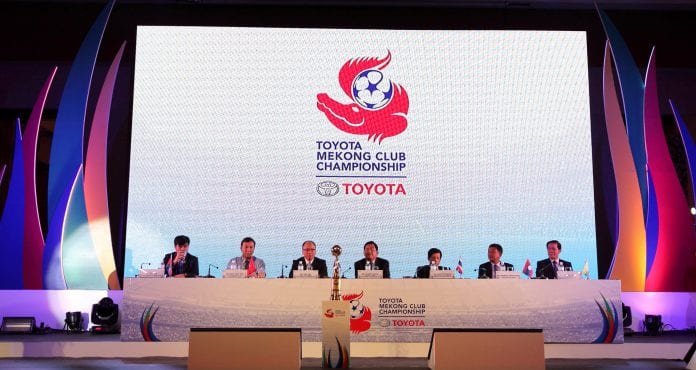 Toyota said this year’s tournament’s aim is to connect with the communities of Cambodia, Laos, Myanmar, Thailand and Vietnam and make football accessible to the young and old, aspiring football players and fans of the sport.

The matches will be held from November 1 to December 20. Thailand will join the championship as a new participant and the tournament format has been revised, whereby matches will be hosted in all participating countries, in a bid to make the sport more accessible to the general public.

The participating football clubs in the championship will be the winners of each League or Cup in each country.

Between November 1 and 29, Cambodia, Laos and Myanmar will play in home and away matches. This will be followed by the Semi-final held on December 6, where the Vietnamese team and the winner from three countries will play in Vietnam. Finally, on December 20, the final match will be held in Thailand.

In addition to the title, the winning team will also receive a cash prize of $75,000.

Tickets for the matches will be on sale at the stadium on match day.

“This year, all matches will take place in all five countries to create more enthusiasm and excitement for this Championship. I anticipate this new format will attract more people and football fans alike, in each country, to gather and cheer their home team on,” said Kyoichi Tanada, president of Toyota Motor Asia Pacific.

Toyota said it is going to continue the Toyota Mekong Football Challenge to engage the youth through football in Thailand and Vietnam. In Thailand and Vietnam, football clinics will be conducted in seven provinces in Thailand – (Chonburi, Nakornratchasima, Khonkaen, Bangkok, Pitsanulok, Ratchaburi, Nakornsrithammarat) and four provinces in Vietnam – (Ha Noi City, Da Nang City, Ho Chi Minh City, Can Tho City). Promising young talents will be selected to be part of a junior representative Toyota team that will fly to Japan to play against the junior teams of the Japan Professional Football League.

“Parallel to the title sponsorship, we are also continuing the Toyota Mekong Football Challenge to inspire and groom young football talent. Many youth are keen on football, either from playing during their free time or inspired by a player who has beaten the odds to be a national representative. We want to be able to give these youth an opportunity to learn some tips and be inspired by the athletics,” said Tanada.