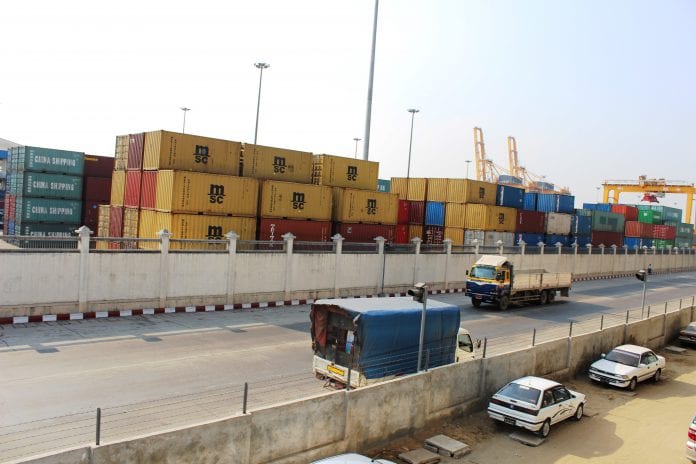 Disappointing trade numbers released this month are due to border conflict and uncertainty over the minimum wage and currency devaluation, according to officials from the Ministry of Commerce.

In 2015-16 fiscal year until June, maritime trade stood at $4.34 billion and border trade at $1.43 billion, for a total of over $5.77 billion of foreign trade. Last year, the total foreign trade in the same period was $5.71 billion, meaning a mere 1 percent trade growth has been registered.

Both maritime imports and exports decreased, putting down total maritime trade figure in 2015-16 by $404.35 million compared to the same period last fiscal year.

U Myint Cho, an official at the Department of Trade Promotion, told Myanmar Business Today, “Industrial production has decreased because of the uncertainty over the minimum wage issue. Fisheries industry has also experienced difficulty.”

However, overland trade did go up somewhat – by $468 million compared to the same period in 2014-15. The export of agricultural products via land routes saw a significant rise.

U Myint Cho said, “Currently, China buys a lot of agricultural products, so the exports via borders have increased. About 80 percent of agricultural exports occur at border trade stations.”

He said, however, the ministry is hopeful about reaching this year’s projected trade total of $29.8 billion.

Border trade has also seen an increasing use of Individual Trading Cards (ITC) to export goods, although the small-scale traders using this system contribute only a small share to exports.

K1.1 billion ($1 million) worth of goods were exported with ITCs since the beginning of the fiscal year, and K941 million ($844,967) worth of goods was imported. The busiest trade for ITCs were Lweje, Tachileik and Reed trade stations.