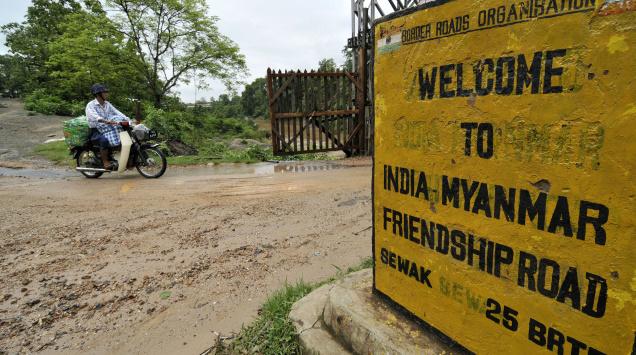 Smallholder trading with Individual Trading Cards (ITCs) at Tamu border trade station along the Myanmar-India border has amounted to K3.67 billion ($3.6 million) since the card was introduced two years ago, official data shows.

The ITCs were firstly issued in November 2012 and 113 traders have received them so far in Tamu.

“Aiming to spur the trade growth, we are providing one-stop service [to issue ITCs] and also accepting inquiries by phone or in person over arising problems,” U Nay Htet Min told Myanmar Business Today.

While total trade through Tamu has previously been expected to reach $36 million in 2014-15 fiscal year, over $21 million in trade has already been reached in the first half of the fiscal year.

A new goal to achieve $23.4 million trade has been set for the second half, he added.

However, trade has slowed in November because of a landslide caused by a storm in Indian Ocean leading to a block on the Monyar-GantGaw-Kalay road, while a bombing on November 12 in India resulted in heightened security.

Tamu’s trade target for November of $4.49 million is likely to be missed, as only $1.9 million has been garnered as of November 17, according to the statistics supplied by the Tamu border station.

Betel and onion are the major exports to India through Tamu while wheat, motor bikes and pulses are the main imports.

According to statistics from the Ministry of Commerce, trade with ITCs at 18 border trade stations around the country racked up K1.8 billion in exports and K3.2 billion in imports during April-October this year.