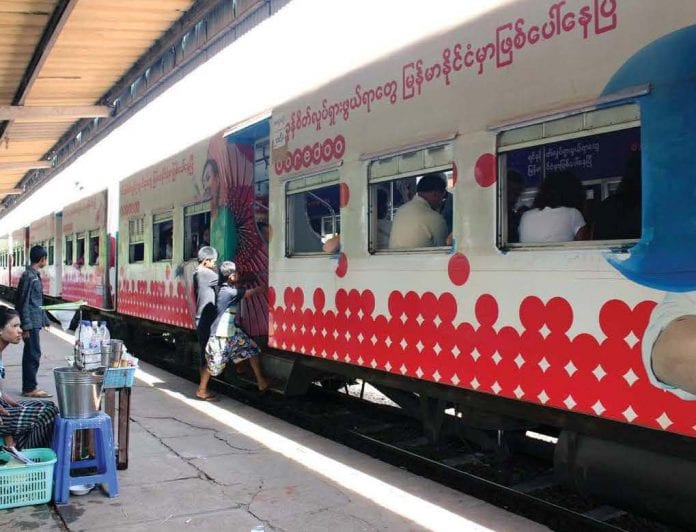 Although open tenders have been floated to invite businesses to place advertisements on intercity trains and trains on the Yangon circle line, the plan has so far failed to attract enough attention to cover all the designated train carriages with advertisements, an official said.

The state-owned rail enterprise has accepted bids to place advertisements on some carriages of 15 circular and intercity trains. Tender winners are expected to enter into contract of at least one year.

“Although train advertising provides better exposure than that on buses or taxis, few are interested because the condition of the circular train track is substandard and some carriages are older than the others,” U Soe Moe Aung, business manager of Myanma Railways Region 7 told Myanmar Business Today.

Many international companies, which often buy expensive advertisements, are making their presence felt in Myanmar. However most of them have not contacted to Myanma Railways to place train advertisements, instead relying on advertisement agencies for their marketing.

Presently only seven companies, including telecom firm Ooredoo Myanmar, have entered into contracts to advertise on train carriages.

“We expect to earn K200 million from advertisements this year. The fee is only for the space and the tender winning advertisers are to bear all the other preparation costs,” U Soe Moe Aung explained.

Different prices starting from K4 million per carriage are set based on the condition of the carriages while advertisements for alcohol, cigarettes and those deemed culturally unacceptable are banned.

Twenty-one circular trains are running in Yangon every day while only about 10 trains carry advertisements.