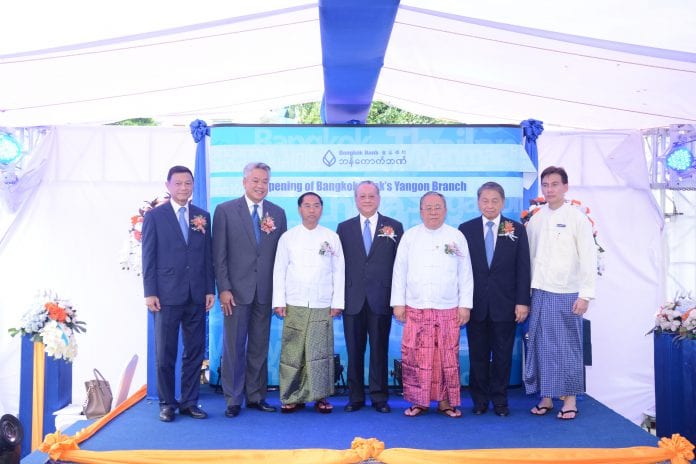 After sustaining a representation office in Myanmar since 1995, in October last year Bangkok Bank became one of the nine foreign banks that received preliminary approval for the opening of a branch office by the Central Bank of Myanmar.

“We will cooperate with the local banks regarding banking services and technology,” Senior Vice President and Branch Manager of Bangkok Bank Kanet Buranasin said at the launch of the branch. “Bangkok Bank is currently cooperating with Kanbawza Bank, Cooperative Bank (CB), Ayeyarwaddy Bank and Myanmar Oriental Bank.”

This preliminary licence allows Bangkok Bank to serve foreign-invested companies and domestic banks of Myanmar and to offer a range of financial services such as loans, syndicated loans (with domestic partner banks), current and saving accounts in four currencies (Kyat, Singapore Dollar, Euro and US Dollar) as well as foreign currency exchange services without restrictions regarding the geographical coverage in Myanmar.

Pisanu Suvanajata, ambassador of Thailand to Myanmar, welcomed the presence of Bangkok Bank – the only Thai bank with permission to operate in Myanmar – as an important step to facilitate financial transactions for entrepreneurs and investors between Thailand and Myanmar.

Since the preliminary banking licence has been granted, Bangkok Bank has signed several memoranda of understanding with domestic banks, completed the preparation of its branch operation and set up its country team of about 20 employees. In the proposal of Bangkok Bank, a capital of $200 million has been injected.

CEO of Cooperative Bank U Kyaw Lynn, said, “Bangkok Bank has provided training to our staff and we have also provided advice to them. Foreign investors will be benefited from the services provided by the foreign banks.”

The opening of branch offices of foreign banks in Myanmar is a fundamental political move representing – equally – the continued progress in Myanmar’s economic reforms and an element of a systematic and careful step-by-step approach to opening the banking sector to foreign investment.

The sudden acts of the nationalisation of 14 foreign banks in Socialist Burma in the 1960s, the arbitrary demonetisation of a considerable share of the currency in circulation in the 1980s and Myanmar’s banking crisis of 2003 created significant mistrust and isolation of Myanmar’s banking sector.

Still remaining restrictions to foreign banks as Bangkok Bank therefore are to be understood in the light of the motivation of not unsustainably hastening developments. Bangkok Bank as well as the other eight foreign entrants to the banking market, however, still face discrimination compared to local banks: The provision of loans to Myanmar nationals as well as fully locally owned companies is not yet permitted to any international bank.

Further necessary steps in the reform process of Myanmar’s banking sector include the modernisation of the legal framework for the banking sector, the removal of the ceiling interest rate for loans in Kyat inhibiting affordable financial access to local small and medium enterprises, the introduction of further currencies in retail and corporate banking, the initiation of more foreign-oriented monetary policies and the strengthening of the public institutions of the banking sector.