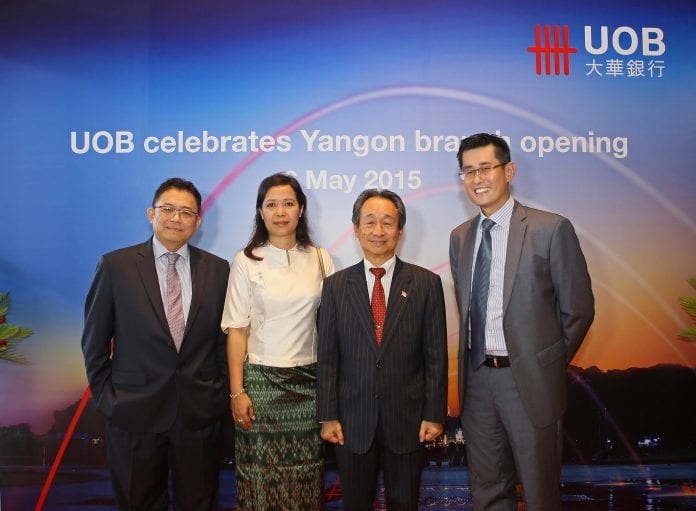 In a presentation, UOB’s country manager Harry Loh said that they would focus primarily on energy, hospitality, construction and infrastructure, and manufacturing. UOB cited a report by the McKinsey Global Institute as saying that these sectors, “are expected to contribute 70 percent to Myanmar’s GDP in 2030.”

UOB has had a representative office in Yangon since 1994, but were until last month prevented by law from offering commercial services.

As part of their initial rollout, UOB announced that they would be providing a loan to the French-Myanmar joint venture Rangoon Excelsior Company Limited, which they claim is the first onshore loan by a foreign bank in Myanmar.

Like all other foreign banks operating in Myanmar, they are still subject to restrictions by the central bank, and are only allowed to lend money to foreign businesses or to local banks, not directly to Myanmar businesses or individuals.

They intend to work with local banks to help facilitate cross-border trade deals through banking services and risk sharing. Harry Loh declined to name agreements with any specific bank, saying, “All the local banks are our friends.”

This is in contrast to other foreign banks who have opened branches in Myanmar, who have touted specific arrangements with local banks, such as one between MUFJ and Ayeyarwady Bank.

UOB was one of nine foreign banks to be awarded licences to open branches. They have been the fourth branch to open their doors.

UOB operates in 19 countries, in Asia-Pacific, Western Europe, the US and Canada.