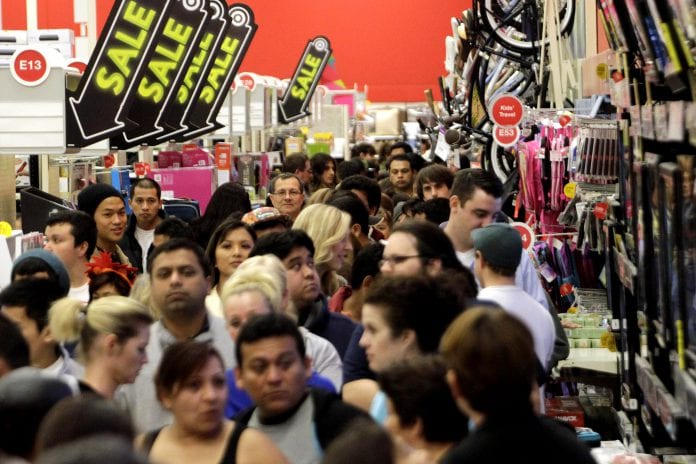 US retailers have little room for error in the fast-approaching and shortened holiday shopping season, a period that typically generates 30 percent of annual sales.
A late Thanksgiving – the unofficial kickoff for holiday sales – has lopped six days off the gift-buying season.
The battle for retail dollars is so fierce that even Uncle Sam will be delivering on Sundays in some locations this holiday season.
Amazon.com Inc announced last week that it would be the first retailer to partner with the US Postal Service to offer Sunday delivery beginning November 17 in the New York and Los Angeles areas as it looks to give shoppers more shipping options. In 2014, Amazon plans to expand the service, which will continue past the holidays, to other locations including Dallas, Houston and Phoenix.
In other responses to the shortest holiday shopping season in a decade, retailers have tested their websites more, started sales a month early and hired extra trucks and planes to make last-minute deliveries if bad weather shuts down malls.
“You don’t have much time to react if there’s a snafu in your distribution system, if your website fails or if your rivals get very aggressive with discounting,” said Michael Dart, a senior partner at consulting firm Kurt Salmon.
The stakes are high as the holiday season accounts for about half the profits of many retailers.
Sales forecasts for this year’s holiday retail season have been somewhat gloomy but they were issued before recent economic data showing stronger-than-expected growth in jobs and the broad economy.
ShopperTrak said in September it expected sales to rise only 2.4 percent in November and December this year compared with increases of 3 percent in 2012, 4 percent in 2011 and 3.8 percent in 2010.
Morgan Stanley said in October it expects this holiday season to show the weakest increase in sales since 2008 when the US economy was reeling from the recession.
Six fewer days between Thanksgiving and Christmas this year versus 2012 means less time for people to shop and for stores to respond if sales flop or weather prevents mall visits. Adobe Systems Inc, which provides digital marketing tools, said the shorter season could shrink retailers’ online sales by $1.5 billion.
“This year it’s going to be like lightning – it’s going to go very fast. Every single day is going to matter,” said Macy’s Inc Chief Executive Terry Lundgren.
Like many retailers, Macy’s is opening most of its stores on the November 28 US Thanksgiving Day holiday for the first time. Rivals JC Penney Co Inc, Kohl’s Corp and Sears also are opening at 8pm on Thanksgiving. Best Buy Co Inc is opening doors at 6 pm, while Toys R Us opens at 5 pm.
The short season is one reason that retailers have already started holiday-themed promotions, especially online. Almost half of retailers started promotions by November 1, and a quarter of shoppers had started shopping, according to a report by Experian Marketing Services.
The short, intense season means many companies are taking extra steps to ensure stores are stocked faster and websites are ready to handle any abnormal spikes in traffic.
Penney, under enormous pressure to return to sales growth this holiday season, has tweaked its supply chain so that holiday merchandise can get more quickly to its 11 “store support centres,” the last stop for merchandise before the store shelves. That should shave a week off the usual time it takes to get items into stores.
Sony Corp, which is selling a new PlayStation 4 game console, is leasing more temporary warehouses across the United States so it can quickly replenish stores to avoid sellouts.
GameStop Corp is working with United Parcel Service to make sure it can have on-the-fly access to more ships, trucks and planes to ship additional products, including the PlayStation and Microsoft’s Xbox, to stores or customers.
In a year when e-commerce is expected to account for about 12 to 13 percent of holiday sales versus 11 percent last season, retailers are paying more attention to their websites.
Wal-Mart Stores Inc and Target Corp, both of which struggled to keep up with online demand in 2011, said they had heavily tested their websites to ensure that they could withstand the extra pressure that will come from a shortened season.
One snafu has already occurred. Last week, a technical glitch on Wal-Mart’s US website led to it offering some items at a fraction of their actual retail price. Treadmills, which normally cost hundreds of dollars, were priced at $33.16, for example.
“This was a specific technical error that affected pricing. It did not impact our ability to handle volume, and we continue to be confident in our ability to handle holiday volume this season,” Wal-Mart spokesman Ravi Jariwala said.
Still, in October, websites of many of the largest US retailers scored below average in terms of response time, data from Compuware APM showed.
EBay Enterprise, a unit of e-commerce giant eBay Inc, is renting more space in the cloud and more servers to make sure its clients’ e-commerce sites withstand all the traffic. This year, online orders can be placed up to 10 pm on December 23 and packages will be delivered by Christmas Eve.
Amazon, which has dominated online retail, is providing the Sunday delivery service to members of Amazon Prime, a subscription service that offers unlimited free two-day shipping.
“We’re preparing for that last week to be an incredible surge in volume as customers get those last-minute gifts, and we’re lining up every delivery solution we have,” said Dave Clark, Amazon’s vice president of worldwide operations and customer service.              Reuters