US Should Update Myanmar Blacklist: HRW 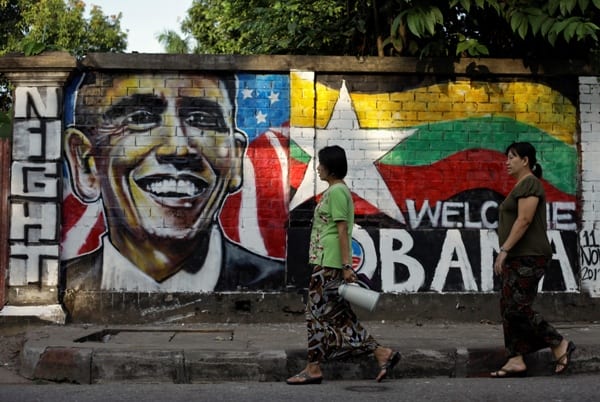 The United States government should ensure that remaining sanctions on Myanmar are kept up-to-date on human rights abusers, Human Rights Watch (HRW) and 36 other organisations said last week in a joint letter to President Barack Obama.
The Obama administration should move quickly to revise the Treasury Department’s list of individuals and companies barred from having financial or business ties to the United States by both adding names of rights abusers to the list and setting clear and public criteria for removal from the list, HRW said in a statement.
“As American and other investors move into Myanmar, they need up-to-date information so they won’t risk becoming partners with people tainted by serious human rights abuses and corruption,” said Lisa Misol, senior business and human rights researcher at Human Rights Watch.
“The US government should update the sanctions list to clearly identify the people and companies investors need to avoid.”
Since 2012, the US government has waived most sanctions on Myanmar in response to reform efforts by the government of President Thein Sein. The US has kept in place the targeted sanctions that block certain individuals or companies from any dealings with Americans and freeze their US assets, based on their ties to the military junta that ruled Myanmar until 2011 or their record on human rights, corruption, or arms trading with North Korea. However, despite changes in Myanmar, the list has remained essentially unchanged since 2009.
For instance, the list should include Brigadier General Tun Tun Naung, a military commander whose troops carried out serious rights abuses and violations of international humanitarian law against ethnic Kachin civilians, including the indiscriminate shelling of the town of Laiza in January, Washington-based HRW said.
A leaked 2009 diplomatic cable from the US embassy in Rangoon noted that “many of the real perpetrators of human rights abuses or those who provide significant support to the regime are not yet targeted” and that the more than 400 names it had provided had not been added.
The Specially Designated Nationals list is maintained by the Treasury Department’s Office of Foreign Assets Control. The Associated Press (AP), which reviewed the Treasury Department’s online records in May, found that the Obama administration had made only one minor change to the list between January 2009 and July 2012. It has since added and removed a few names.
The administration was reluctant to expand the sanctions list at a time when it was establishing relations with the Thein Sein government and it chose instead to give priority to positive incentives for reformers, unnamed officials told the AP.
New names should be added to the list in line with a presidential directive to impose targeted sanctions on those responsible for human rights abuses and who undermine political reforms or the peace process with ethnic minorities in Myanmar, Human Rights Watch and the other organizations said.
The administration should also adopt and publish clear criteria for deciding who should be removed from the list, including a requirement for those listed to provide a public accounting of past sanctioned activity, make restitution to victims, and cut ties to the Burmese security forces. Suspect companies should agree to undergo a full and independent audit and individuals should publicly declare their assets.
“The US government should not take anyone off the Myanmar sanctions list until they take full responsibility for past abuses and demonstrate a commitment to change,” Misol said.
“Otherwise the US will reward bad actors and victims will be denied redress.”