US Urges Myanmar to Probe Attacks on Muslim Minority 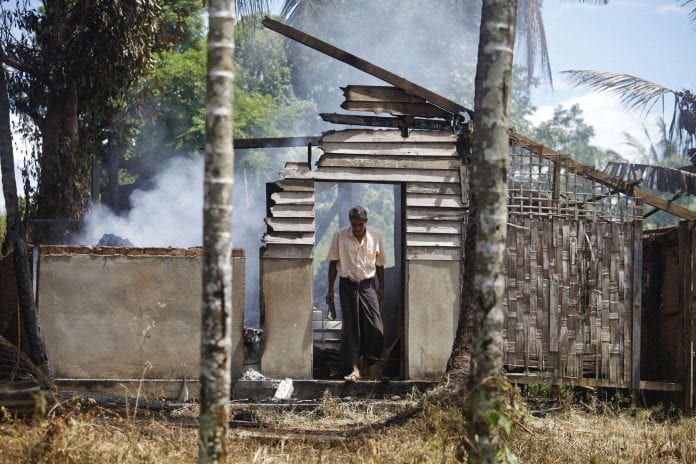 The United States on Friday urged Myanmar to investigate reports that security forces and Buddhist mobs attacked members of the Rohingya Muslim minority this week, killing as many as 60 people.

Rights groups reported attacks by security forces and ethnic Rakhine Buddhist mobs against Rohingya in a village in the Maungdaw township of western Rakhine state over the past three days.

“The United States is deeply concerned about reports of fresh violence in Rakhine state, including reports that security forces may have committed abuses,” a US embassy official told Reuters. “We urge the government to thoroughly investigate such reports.”

Chris Lewa, director of Rohingya advocacy group Arakan Project, said the numbers of unconfirmed dead ranged from 10 to 60. She said the violence appeared to have started when Rohingya villagers clashed with police on the evening of Jan 13.

Incidents in Maungdaw township and other parts of Rakhine state are difficult to verify independently, as they are off limits to journalists and the government strictly controls access by international aid groups.

Aung Win, a Rohingya activist based in the state capital of Sittwe, told Reuters his contacts were unable to reach the village because it had been “encircled” by security forces, preventing anyone from checking for dead bodies.

Medecins Sans Frontieres, which runs a nearby clinic, said it was concerned that residents who fled the area may need medical care.

“MSF confirms that on Wednesday it saw two wounded people suffering from injuries inflicted as a result of violence – one from a gunshot wound and the other exhibiting injuries consistent with a beating,” said Myanmar head of mission Peter-Paul de Groote.

Any deaths this week would add to the tally of at least 237 people killed in religious violence across Myanmar since June 2012, which has also displaced more than 140,000 people.

Most of the victims were Muslims and the most deadly incidents happened in Rakhine state, where about one million Rohingya live under apartheid-like conditions, denied citizenship with their movements tightly restricted and with little access to health care, jobs or education.

Rohingya have been fleeing Myanmar in droves, crowding into dangerously overloaded boats, with many dying at sea. The exodus has created problems for neighbouring countries dealing with the flood of illegal immigration.

Myanmar’s government said on Thursday, however, it would not discuss the issue at meetings of the Association of Southeast Asian Nations (ASEAN), a regional political and economic bloc it will chair through 2014.

“This Bengali issue is our internal affair so we wouldn’t discuss it, even if other countries demanded at the ASEAN meetings while our country is the chair,” government spokesman Ye Htut told reporters.

Like many in Myanmar, Ye Htut used the term “Bengali” to refer to the Rohingya, who reject the designation, which they see as underscoring an assertion that they are illegal immigrants from Bangladesh, even though many families have lived in western Myanmar for generations.

Teachers in Myanmar will be able to enjoy free access to the Ministry of Education’s online platform for six months as Telenor Myanmar strengthens...
Read more
Business

The Ministry of Construction has drafted and sent the Construction Industry Development Bill to the parliament aiming to standardize all the requirements and standards...
Read more