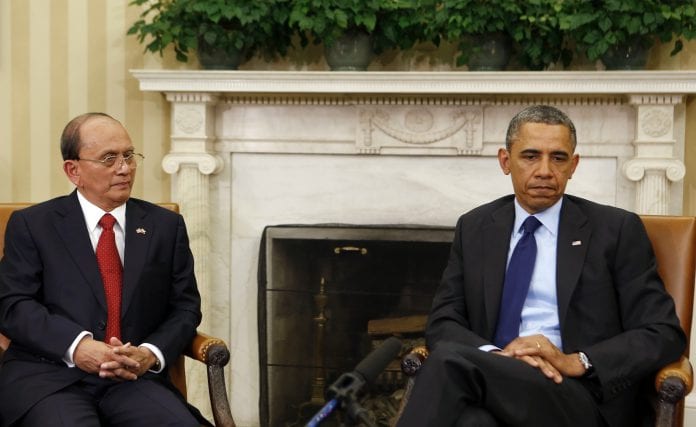 The US Campaign for Myanmar (USCB), along with 28 other human rights organisations, urged President Obama to continue the national emergency with respect to Myanmar.

This authority is set to expire this month. In April, the US Commission on International Religious Freedom also pressed for the renewal of the national emergency.

“President Obama must renew Myanmar investment sanctions to make clear that the US supports democratic progress and constitutional reform that will ensure free and fair elections in 2015,” said USCB Policy Director Rachel Wagley.

The concerns and rationale for continuing the national emergency in 2013 persist and “have even worsened,” USCB said in a statement.

Last year, the Obama Administration cited persisting concerns such as continued arrests and detentions, ongoing conflict and human rights abuses in ethnic minority areas, efforts to undermine or obstruct the political reform process, and the country’s military relationship with the Democratic People’s Republic of Korea.

USCB said throughout 2014, journalists, farmers, activists, human rights defenders, and ethnic minorities have continued to be arrested at alarmingly high rates. Earlier this year, four journalists and the CEO of the Yangon-based Unity Journal were arrested, and some sentenced, for reporting on a chemical weapons factory.

Freedom to scrutinise the government is fundamental to building a democratic state, but in Myanmar, those who critique the government face detention and harsh penalties, according to the rights group.

USCB said the government also continues to commit human rights abuses against vulnerable minorities in Kachin and northern Shan states. In March, the UN Secretary-General called for an investigation into these past and ongoing violations and abuses, specifically including crimes of sexual violence.

“Government actors also continue to deliberately undermine and obstruct the political reform process. The government is actively backsliding on its high-profile press reforms by tightening restrictions on domestic and foreign media through law, censorship, and underhanded surveillance practices,” USCB said.

“It is imperative to send a strong message that the persecution of ethnic minorities, detention of political prisoners, political backsliding on crucial reforms, and drafting of new repressive laws will not be tolerated by the US Administration,” said Wagley.

“We must ensure that all people of Myanmar are beneficiaries of reform, not victims of preventable abuses.”