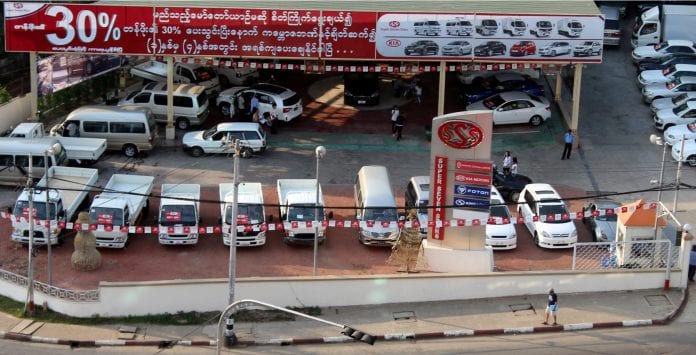 After witnessing changes in rules and regulations for vehicle imports nine times in the last three years, auto industry insiders demand that they should be informed in advance of any potential policy changes in the current fiscal year.

Frequent policy changes by the Ministry of Commerce and the Department of Inland Transport have created a lot of “complications and confusions” among the importers, vehicle importers, distributors and industry experts say.

“We would like to know if there is going to be a change in the current car import regulations and tax rates on Cost, Insurance and Freight (CIF) prices,” said Dr Soe Tun, chairperson of Vehicle Importers and Dealers Association.

“In other countries the public is informed a year before a policy change,” he added.

He said there have been rumours that only cars with left-handed steering wheels will be allowed for import, and the authorities might scrap the import slip system, also known locally as “pink slip”.

The government started a car substitution program through which owners could obtain an import slip in lieu of an old vehicle. The slip allows owners to import new cars and enjoy lower taxes and tariffs.

Currently, the automobile market is seeing a high demand for vehicles worth around K10 million and also for “pink slips” or import permits, worth about K3.6 million, following a recent regulation change that allowed all locally assembled cars eligible for the substitution program.

A total of 98,334 locally assembled vehicles have been registered as of the end of May, and prices of them went up drastically as they were allowed to be exchanged.