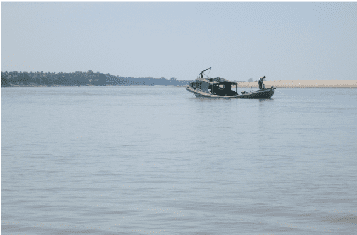 The village of Ngar Myar Gyi, located on the western bank of the Ayeyarwady river in Magway region, has been almost destroyed due to eroding of the bank on the river, local people have said.
Located two miles away from the lower confluence of the Ayeyarwady and Chindwin rivers, the village began suffering from erosion in 1994.
The villagers have called on respective departments in the government to help solve the situation in a bid to facilitate relocation and build their lives again.
“In our village, 2,000 acres of have land have been destroyed due to the erosion,” said U Tin Win from the village.
“Now we have difficulties for even the most basic necessities. We also need land to build homes and cultivate paddy,” he added. Most of the villagers are employed in the agricultural industry in Ngar Myar Gyi.
Since the Ayeyarwady erosion started, local residents had to relocate three times up to September this year, and many houses and a primary school were pulled down.
The local populace has also been facing difficulties in having access to basic needs. Some residents have to go to neighbouring villages to earn their livelihoods, villagers said.
Magway region’s Chief Minister U Phone Maw Shwe has already visited the village and pledged K15 million ($15,000) to help local people, villagers said, while Yangon Funeral Aid Association has donated K20,000 ($20) each to certain families, K340,000 ($340) to 170 families and provided K200,000 ($200) for the building of two monasteries in the region.