Wage Rise Beyond 5 to 10pc Would Kill the Industry: Garment Leader 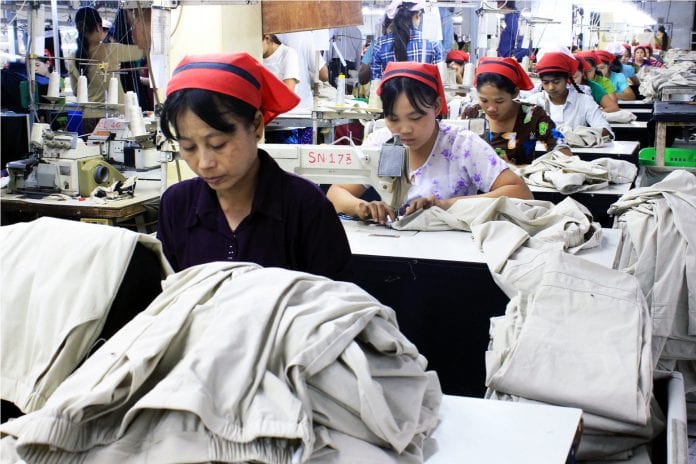 Recently, the Federation of Trade Unions of Myanmar (FTUM) called for a raise in the minimum wage in Yangon to K5,000 per day.

Because Myanmar is new to the garment industry and just starting to produce clothing, most buyers do not yet trust the country and its potential, said U Khin Maung Aye.

“Most buyers do not know Myanmar, don’t know its quality, and don’t know if we can supply on time, so they do not pay very high prices, [they pay] lower than other countries. If buyers gain confidence in a few years … the price they well pay will go up.”

Additionally, paying garment workers on a flat pay rate would hurt productivity and kill the industry, according to U Khin Muang Aye. He said that in his own factories, workers might make as much as K4,000 per day, but this is including added money such as productivity bonuses and overtime.

MGMA recently published a voluntary code of conduct, which stated, “The wage level for regular working hours shall not fall below contractual or legal minimum wage rates. Wages and benefits are paid on time and disbursed in a way that is convenient for the workers.” However, there is still no effective minimum wage law in Myanmar.

There have been ongoing labour strikes in Chinese- and Korean-owned factories outside Yangon in recent weeks, asking for a raise in wages from their current levels of K50,000 per month, according to local media.

The average wage in the manufacturing sector was $176 per month in Vietnam, $113 per month in Cambodia and $100 per month in Bangladesh, according to a report released last month by the Japan External Trade Organization (JETRO).