What Myanmar’s Story of Generosity Means to The World 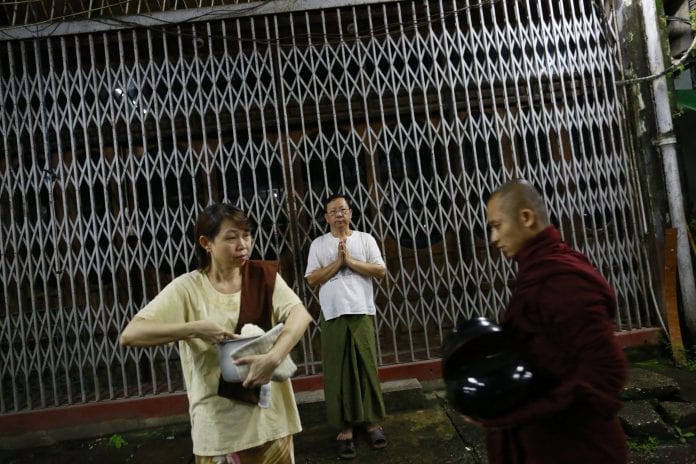 Immediately after the United States, the world’s second most “generous” nation in 2013 was not Australia, the United Kingdom nor Japan but Myanmar, formerly one of the world’s least developed countries and just emerging from decades of isolation, ethnic conflict, human rights abuses and abject poverty.

That’s according to Charities Aid Foundation, a London-based NGO which operates its own bank for charitable and non-profit activities and which ranked Myanmar second in its recently published World Giving Index, just behind the US and tied Canada and New Zealand. This opens up a whole new trend in aid giving and charity, opening up the potential of developing economies and pushing the idea of charitable giving – that giving is more than just wealth – to new heights.

“The Myanmar case is interesting. The wider point about charitable giving in developing countries is one which we are eager to talk more about,” CAF Australia CEO Lisa Grinham told Devex.

“Generally, richer countries see higher levels of donations of money to charities due to the fact that more people have money to give. However, we should not kid ourselves that money breeds generosity.”

She added: “Many developing countries see huge levels of engagement in informal charitable activity, as is reflected in the high numbers of people who report helping a stranger … in developing countries. As poorer countries develop economically, the governments who are able to nurture this tradition of giving and convert the generosity of citizens from informal to formal engagement in giving will benefit from the transformative capacity of civil society.” 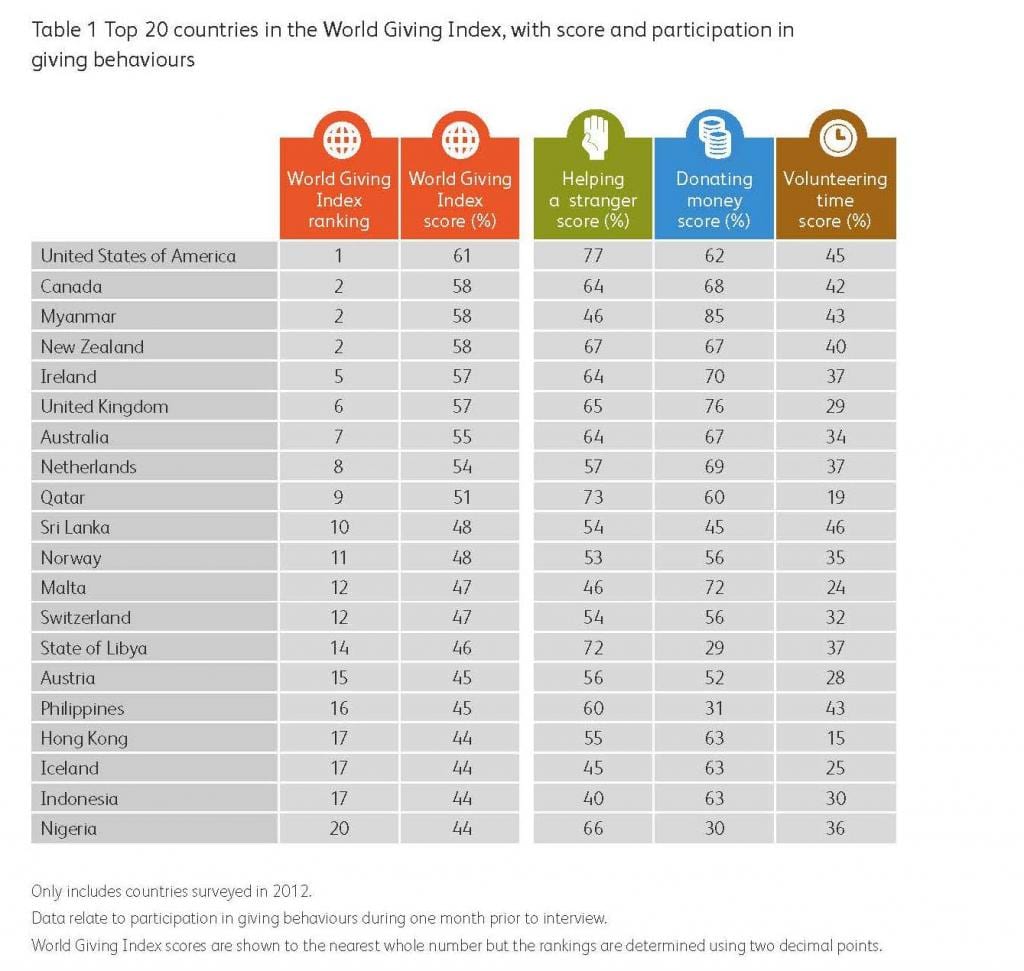 The annual index measures people’s behaviour in terms of charitable activities, with a special focus on how frequent people help a stranger, donate money and volunteer their time for charity and not just amount of money donated.

Myanmar ranked first in the donating money category in the index with an 85 percent rate. The category measures the frequency with which the people donate money to charity over the past 12 months.

The idea that charitable giving and generosity is not wealth-bound, as exemplified by Myanmar, gets a stronger claim with 15 countries out of the top 20 not part of the G-20 including Qatar, Sri Lanka, Malta, Libya, Hong Kong, Nigeria and the Philippines, to name a few. An interesting argument for rich, aid-giving nations, however, can be considered given that their high taxes go directly to the budget which has a development assistance appropriation. 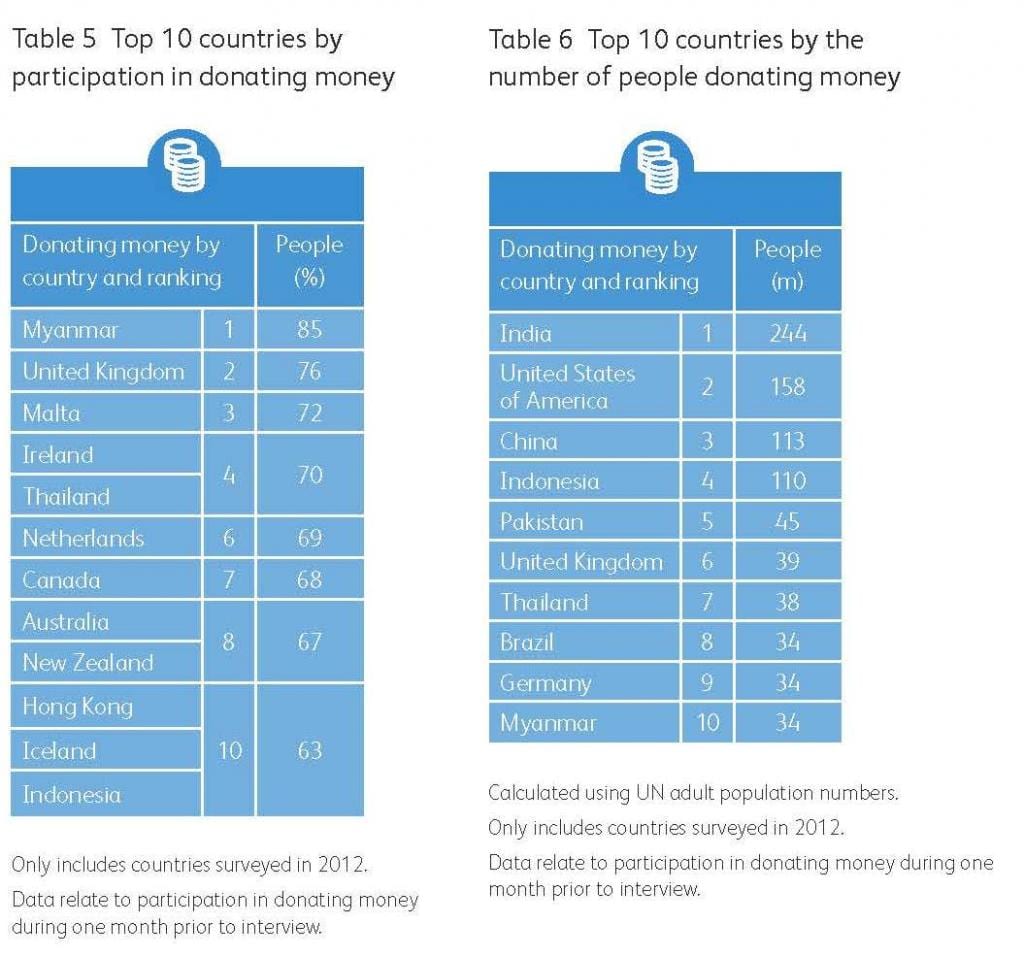 Grinham said developing economies will play a central role in driving social transformation through charity with the emerging middle class projected to rise by 165 percent by 2030.

“[The index] estimates that this next potential generation of donors could contribute $224 billion if they gave just 0.4 percent of their income to charity — the same as people in the U.K. give,” she explained. “We believe that developing nations need to create an enabling environment for domestic civil society.”

Grinham added these steps “include proportionate regulation that recognizes traditional forms of giving and builds trust by creating an environment where charities can demonstrate their effectiveness. We also believe that governments should commit to allowing civil society the freedom to express itself and criticize government policies.”

A country’s social and cultural elements also play a significant role in people’s behavior toward aid and charity, according to the CAF country director in Australia. In Asia, in particular, a strong sense of community shaped by norms and religious beliefs forms part of the way people act towards helping others.

“In the case of Myanmar, the high proportion of people following … Buddhism, in which lay devotees support the lifestyle of devout monks through charitable giving, explains such high levels of giving,” said Grinham.

While Myanmar went to the peak of the index, Australia, a consistent leading figure in charitable giving the previous years, slid down to 7th place from the top just over a year ago with a 55 percent overall score.

The country’s rankings across all three categories were well below the mid-table range of the top 20 list. Australia ranked 13th in helping a stranger, eighth in donating money, and 18th in volunteering out of 135 countries surveyed.

Grinham explained that the drop in rankings may be caused by the absence of major disasters in 2012 – the year covered for the 2013 index – over 2011 including the floods in Queensland, the Christchurch earthquake in New Zealand and the Japan tsunami.

“The index is based on the 2012 year. In 2011, Australians rallied to support a number of significant disasters in our region,” she explained.

“Australians are known for being particularly generous when it comes to disaster appeals, so we can summarise that as there were no disasters of the magnitude of 2011 in 2012, this is the key reason for the drop.”

It will be interesting to see the results of the 2014 index when it comes later this year, which will surely cover the global giving trends given the scale of disaster relief activities involving almost every nation in the world in the Philippines after Typhoon Haiyan.

Lean Alfred Santos is a Devex staff writer focusing on the development community in Asia-Pacific, including major players such as the Asian Development Bank and AusAID. Prior to joining Devex, he covered Philippine and international business and economic news, sports and politics. Lean is based in Manila.

The article was first published on Devex website and has been republished with the publication’s permission.