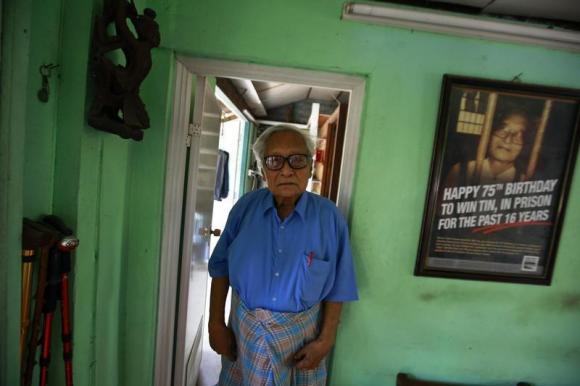 Win Tin, a veteran Myanmar journalist and ally of Aung San Suu Kyi, who spent 19 years in prison because of his fight against military rule, died on Monday at the age of 84, colleagues said.

He was a founding member of Suu Kyi's National League for Democracy (NLD) in 1988 and one of the party's leaders, but said he preferred being a journalist.

"I honestly think I was cut out just to be a journalist rather than a politician," he told Reuters in 2010.

But he was an activist journalist and could not sit idly by as his people suffered under decades of dictatorship.

He took part in nationwide protests in 1988, which were brutally crushed by the military, and helped set up the NLD later that year.

"We've lost the most selfless and fearless politician," his close friend Tha Ban, another veteran journalist and politician, told Reuters.

"It's an irreplaceable loss for not only for the NLD but also for the entire people."

Win Tin did not always see eye to eye with Suu Kyi, who was released from house arrest in 2010 after a rigged election ushered in a reformist government and ended almost 50 years of military rule.

He publicly disagreed over her decision to run in April 2012 by-elections that took the NLD into parliament, arguing that the party's participation lent authority to a government packed with former generals.

"So far as I know, he was the only leader of the NLD party who had the courage to disagree with Daw Suu openly in some issues," said a senior NLD member who asked not to be named, using an honorific to refer to Suu Kyi.

"But he never betrayed her. He was a staunch supporter of amending the constitution so that it will pave the way for her to become president."

Campaigns by Amnesty International, PEN International and other human rights and freedom of expression advocates turned Win Tin into a globally known opponent of an oppressive regime.

He was Myanmar's longest-serving political prisoner when he was released in an amnesty on Sept. 23, 2008.

"My future plan is to keep fighting till the military dictatorship ends," he told Reuters at the time, still wearing his prison uniform as a symbolic protest against what he saw as his illegal detention.

Win Tin, who never married, was admitted to hospital in early March with internal bleeding and died of apparent kidney failure. The NLD is arranging his funeral for April 23.