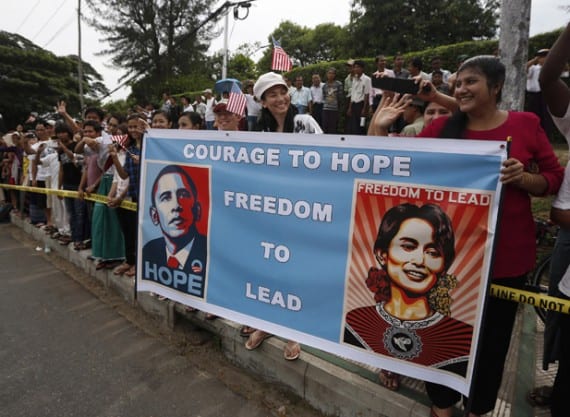 Aung San Suu Kyi’s National League for Democracy (NLD) will go into next year’s parliamentary election in Myanmar with no candidate for president and might even support a former general from the pro-military ruling party, NLD officials said.

Nobel Peace Prize winner Suu Kyi, 69, is barred by the constitution from becoming president and is apparently unwilling to give her blessing to an alternative candidate from within her own party.

One senior member of Suu Kyi’s party said it might give its backing for Shwe Mann, speaker of parliament and chairman of the ruling Union Solidarity and Development Party (USDP), to be put forward for the presidency. The USDP is made up of former military officers.

But that would risk angering many rank-and-file NLD members, including many who were imprisoned by the military. It could risk undermining support for the country’s most popular party and its leader.

“We believe there is no number two position in our party,” Han Tha Myint, a member of the NLD’s executive committee, told Reuters when asked why the party would not put up its own candidate.

“No one is second to Aung San Suu Kyi.”

Suu Kyi, who spent nearly two decades under house arrest for her efforts to promote democracy, is ineligible for the presidency under the constitution, drafted during military rule, which bars candidates with a foreign child or spouse. Her late husband was British, as are her two sons.

Next year’s parliamentary elections will be the first since President Thein Sein embarked on landmark reforms in 2011, dismantling the control of the military which had ruled since seizing power in a 1962 coup.

It will also be the first general election the NLD has contested since it swept a 1990 vote that the military ignored. The party boycotted a 2010 election held under military rule when Suu Kyi was under house arrest.

With a quarter of lower house seats filled by military men, the military-backed USDP is bound to be a force to reckon with no matter how well Suu Kyi’s party does.

The NLD, if it does not put up its own candidate, could decide to use its votes in bargaining with the USDP, rather than risk putting up a candidate of its own who could well be defeated by the combined votes of USDP and the military bloc.

Shwe Mann and Suu Kyi have cooperated in parliament and seem to have established good relations. The former general is seen as more pragmatic than some of his senior party colleagues and even hinted he might support amending the constitution to allow Suu Kyi to be a candidate for president.

“She’s the most popular person in the party. She favours him,” said Nyan Win, an NLD executive committee member.

The NLD collected 5 million signatures around the country to press the ruling party to revise the constitution to remove the military’s veto over changes to the constitution, including the clause that prevents Suu Kyi, the daughter of the country’s independence hero, General Aung San, from becoming president.

But there appears to be little hope that the ruling party, which is supported by the military, will allow an amendment to a constitution that gives the military veto powers.

That means Suu Kyi would appear to have no chance of being a candidate for president in 2015. She won a seat in parliament in a 2012 by-election.

Han Tha Myint said instead of putting its own candidate up for president, the NLD would support a non-NLD candidate who shared the party’s views.

“He doesn’t have to be NLD, but he must think like us,” Han Tha Myint said. “The important thing is that there is someone we can accept as president. For us, that’s enough.”

The decision not to field its own candidate is an indication that the party lacks any other suitable figure apart from its leader, who has always maintained a strong hold over the party.

NLD executive committee member Nyan Win conceded that backing Shwe Mann would be controversial for the NLD, which was formed to oppose military rule.

Many party members were imprisoned by the military and Nyan Win said there was still widespread opposition in the NLD to rule by former army officers.

“If we choose Shwe Mann as president, many problems could arise for the party,” he said.

“Many of our party members and citizens don’t like a situation where army men are governing the country.”

But he said Shwe Mann may be the most viable candidate for the NLD to support. Reuters