Won for The Money: North Korea Experiments With Exchange Rates 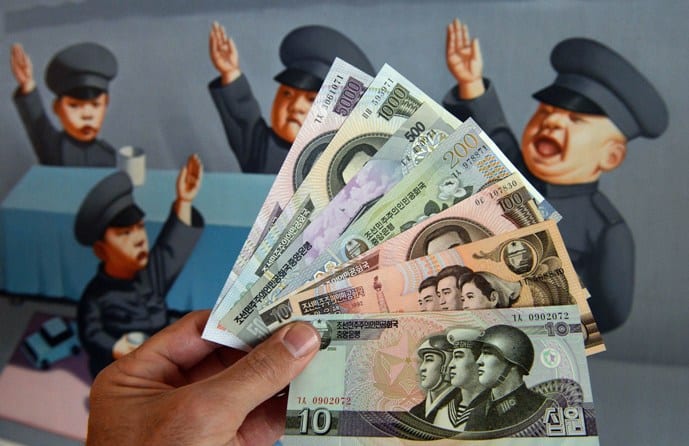 Once reserved for official exchange only in zones aimed at attracting foreign investment, and in illegal underground market deals elsewhere, black market rates are being used more frequently and openly in North Korean cities.

Publicly advertised prices at rates close to the market rate – around 8,000 won to the dollar versus the official rate of 96 – could signal Pyongyang is trying to marketise its centrally planned economy and allow a burgeoning “grey market” to thrive. This could boost growth and capture more of the dollars and Chinese yuan circulating widely so that North Korea can pay for imports of oil and food.

Unofficial market rates could become more widespread following an announcement last month of 14 new special economic zones (SEZs) aimed at kickstarting a moribund economy where output is just one fortieth of wealthier South Korea’s. A spokesperson for the Korea Economic Development Association, a local organisation tasked with communicating policy in the new SEZs, told Reuters that exchange rates in the new zones are to be “fixed according to (local) market rates.”

“The official rate for the won is like a placeholder,” said Matthew Reichel, director of the Pyongyang Project, a Canadian NGO that organises academic exchanges with North Korea. “We all know that the value of the won is not this.”

An estimated 90 percent of economic transactions along North Korea’s border with China are in yuan, an embarrassment for a country whose policy stresses economic independence, and something that reduces the grip that authorities attempt to exercise over its people and economy.

Pyongyang does not publish economic data, but is believed to have run a sizeable current account deficit for years, straining its ability to pay for imports in hard currency.

An attempt in 2009 to revalue the won and confiscate private foreign currency savings prompted protests from market traders and forced a rare policy reversal and public apology from state officials.

“Due to its lack of foreign currency, the North Korean government will have to tolerate black market rates, even if it has difficulty in officially recognising them,” said Cho Bong-hyun, a North Korea economics expert at the IBK Economic Research Institute in Seoul.

Others have gone down this route before.

“This is comparable to Cuba, which implements a dual currency system between convertible pesos and national pesos, and Myanmar, which for years refused to recognise the black market value of the kyat until it became completely uncontrollable,” said Reichel at the Pyongyang Project.

Not only does North Korea not provide official data on its economy, but when things are actually paid for using the official rate, the maths don’t add up.

Pyongyang’s two-line metro system, which only accepts won, is one of the world’s cheapest at just 5 won a ticket. However, the equivalent grey market value is so small that no single coin in any currency is small enough to cover it.

State salaries are also paid according to official rates, meaning the 6,000 won a month paid to a civil servant only just covers the cost of a pack of cigarettes and a lighter.

The difference in official salaries and unofficial prices is made up from an economy that, despite government restrictions, has become increasingly marketised.

While low-end goods and services are increasingly expressed according to grey market rates, transactions at more expensive shops are usually priced using the official rate, but conducted in dollars or yuan.

The Chongjon Sunrise Supermarket in central Pyongyang sells Hershey’s chocolate bars at 150 won and, for the ambassadors in town, boxes of Ferrero Rocher at 1,850 won – the low prices indicate the vendor expects to be paid in foreign currency, not won.

Reichel said that when he once teasingly tried to pay for his midnight snacks with a couple of crumpled North Korean won banknotes, the shop assistant smiled patiently, and politely asked for dollars. At grey market rates, the assistant would have had to accept an armful of 5,000 won notes, the largest denomination, for the 160,000 won the chocolates cost.

Kim Jong Un, the third of his line to rule impoverished North Korea, has repeatedly pledged that austerity is over.

The North experienced a famine in the mid-1990s and its economy was hurt by the collapse of the Soviet Union that propped it up in a Cold War battle for supremacy in Asia.

Trading partners such as China and Russia now insist on being paid in hard currency, draining reserves.

Stacked up against South Korea, whose economy it once outmuscled, and China, which has gone from failed collectivisation to the world’s second-largest economy, Pyongyang faces some tough choices.

Economic reform and freer markets could accelerate the growth of a middle class that is not beholden to Kim and the dynastic rule of his father and grandfather.

One step would be to broaden out the number of institutions like the Golden Triangle Bank in the Rason Special Economic Zone which regularly advertises rates for the euro, dollar, yuan, yen and rouble that no longer reflect the official policy rate.

“There are people who are trying to push for some sort of policy implementation,” said Reichel. “But we won’t start to see sustainable economic development until the government accepts their currency system does not work in the long term, and continuing with this idea of a state-provided salary is futile.”