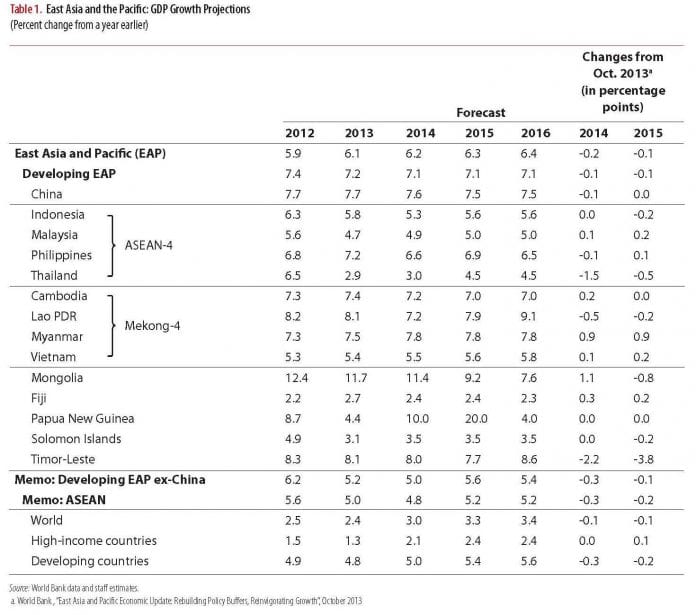 The World Bank trimmed its 2014 growth forecast for developing East Asia but said the region’s economies were likely to see steady growth in the next couple of years, helped by a pick-up in global growth and trade.

The Washington-based development bank expects the developing East Asia and Pacific (EAP) region to grow 7.1 percent in 2014 and 2015, down from the 7.2 percent rate it had previously forecast for both years.

Growth in 2016 is also seen at 7.1 percent, staying slightly below the 2013 growth rate of 7.2 percent, according to the World Bank’s latest East Asia and Pacific Economic Update report issued.

“For East Asia, we believe that the drivers of growth are going to be increasingly from the external front, because of the recovery in advanced economies,” World Bank East Asia and Pacific chief economist Bert Hofman told reporters.

In its report, the World Bank said improving global trade would offset headwinds from the tightening of global financial markets.

Emerging markets, including those in Asia, had been roiled by capital outflows from around May to September last year as investors began positioning for the US Federal Reserve to start tapering its monetary stimulus.

While financial markets in the East Asia Pacific region have shown a muted reaction to the Fed’s actual decision in December to begin scaling back its quantitative easing, the possibility of capital flow reversals remains a concern for developing countries in the region, the World Bank said.

The prospects for a normalisation of US policy rates will put upward pressure on interest rates and could trigger more sizeable capital outflows from weaker economies, as well as make debt management more difficult in countries where leverage has risen, the bank said.

“Vigilance on capital flows remains warranted,” Hofman said, although he added that most of the capital flows in East Asia were now from foreign direct investment rather than portfolio flows, making them less volatile than in the past.

The new 2014 outlook reflected “the bumpy start to the year,” it said, noting that China’s industrial production and exports had been weak in the January-February period.

“While the growth rate of industrial production has slowed, and exports contracted in the first two months of 2014, the trend is nevertheless strengthening, and we expect quarterly growth to rise at midyear as external demand from the high-income countries solidifies,” the World Bank said.             Reuters