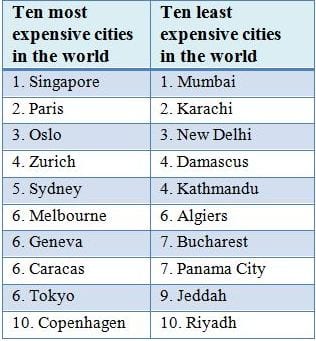 Sydney and Melbourne rank among the top six most expensive cities in the world to live, according to the Economist’s latest Worldwide Cost of Living Survey.

The bi-annual survey, carried out by the business magazine’s intelligence unit, ranked Sydney as the fifth-most expensive city in the world, with Melbourne one spot behind in equal sixth.

Perth and Brisbane shared 21st spot while Adelaide came in at 37th.

The survey of 131 cities assessed costs by comparing more than 400 individual prices across 160 products and services.

Currency fluctuations and rising prices can have a big impact on results.

A 40 per cent rise in the Singapore dollar over the past decade, for instance, saw the city sweep to the top of the rankings.

“As well as Singapore, there have been sustained increases in the cost of living for Australian cities driven by the long-term appreciation of the Australian dollar,” the survey notes.

Despite a slow decline in the value of the Australian dollar in the past year, Sydney and Melbourne continue to maintain their lofty positions in the global rankings due to ongoing price hikes.

By comparison, New York clocks in at the relatively modest position of 26th most expensive.

At the other end of the scale, the least expensive cities include Kathmandu, Jeddah and Riyadh.

Mumbai in India is the world’s least expensive city.

Bucharest in Romania is Europe’s one member in the bottom 10, and Panama City the lowest-ranking member from the Americas.

“Within Asia the best value for money is in the Indian subcontinent,” the report says.

However, it comments drily that “outside India, bargain hunters may be put off put off by the security risk in many of the countries in which the world’s cheapest cities are found”.

“Pakistan, Nepal, Syria and Algeria all feature in the bottom 10, but have had well documented security issues or domestic unrest.”

However, one example that points to a degree of uncertainty in the methodology of how the Economist draws its conclusions is the case of Caracas.

By current calculations the Venezuelan capital is joint sixth most expensive with Melbourne, Geneva and Tokyo.

However, this is entirely based on using the beleaguered Venezuelan government’s official exchange rate for its currency, the bolivar.

“The current official valuation of the bolivar, at 6.29 to the US dollar, is undermined by black-market rates valuing the currency at less than one-tenth of this amount,” the report says.

“As a result, adopting any parallel rate for the bolivar would immediately place Caracas as the world’s cheapest city rather than the current deceptive position it has as the joint sixth most expensive.”                      ABC