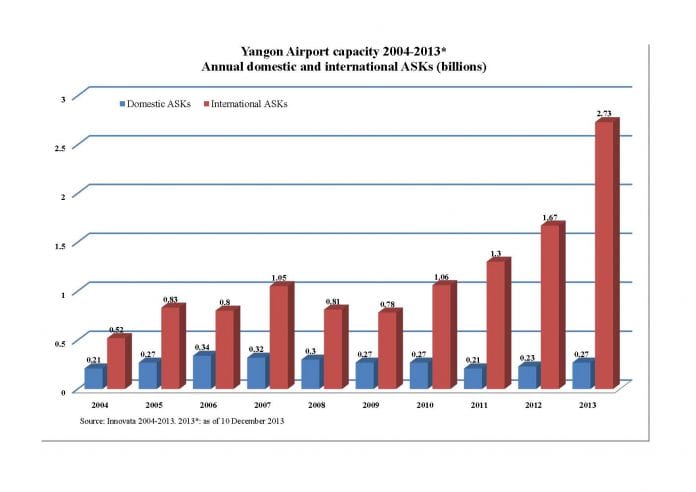 ASK, or Available Seat Kilometres, is the measure of a flight’s passenger carrying capacity, and calculated by multiplying the number of seats on an aircraft by the distance travelled in kilometres.

The international market has by far outperformed the domestic sector in terms of growth, even though the latter experienced 30 percent growth over this period. In terms of Yangon’s international market, this has increased by nearly 420 percent when compared to 2004; therefore, in 2013 this market is expected to reach 2.73 billion one-way ASK.

Yangon Airport is the primary international airport located in Mingaladon, 15 kilometres north of Yangon, the country’s largest city with a population of about five million. Despite losing its status as the country’s capital in 2005, Yangon is still the country’s main centre for trade, industry, real estate, media, entertainment and tourism, and contributes 23 percent to the national GDP. 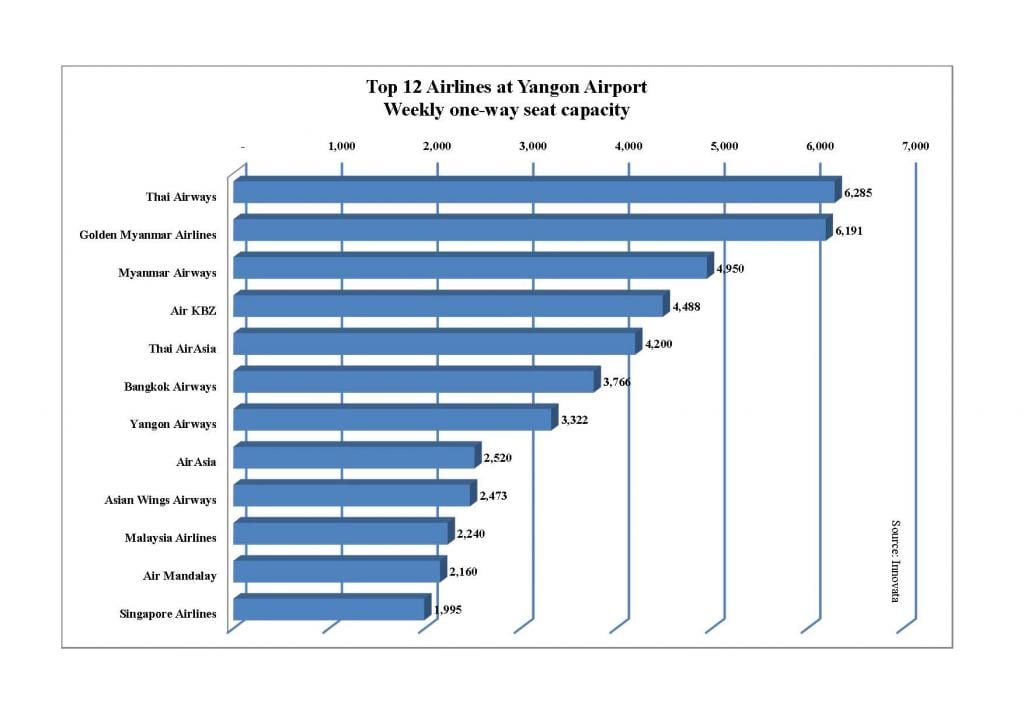 While Thai Airways has increased its capacity over the last 12 months by 4.9 percent, dominating Yangon with its 583-kilometre thrice-daily services to Bangkok, other carriers have expanded their presence as well. Most notable is the entry of Golden Myanmar Airlines, the country’s first domestic and international low-cost carrier that was established in July 2012.

The airline has burst into the top 12 airlines at the No.2 position, featuring a seat share of 9.9 percent at Yangon. The LCC, which has a fleet comprising of two A320s, launched four new services from Yangon this year, namely two domestic flights to Nay Pyi Taw and Mandalay, along with two international links to Bangkok and Singapore.

As of December 2013, the top 12 airlines represent a seat share of 71.7 percent at Yangon. Malaysia Airlines has strengthened its presence with an annual growth in weekly seats of 89.3 percent, as a result of boosting its Kuala Lumpur services to twice-weekly, while Myanmar Airways, the leader in 2012, has recorded the greatest decrease (-31.3 percent), when compared to December 2012. Besides Golden Myanmar, five other carriers started operating from Yangon in 2013, including Asian Wings Airways, which now serves five domestic destinations, utilising its three 47-seat ATR 42s and one 182-seat A321. 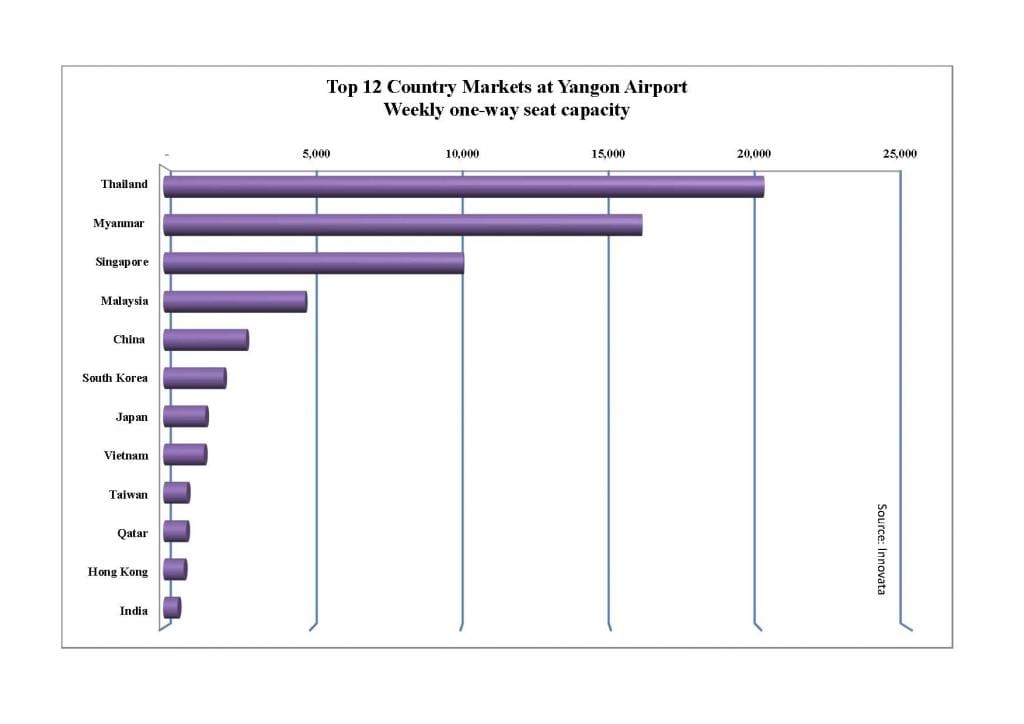 The fastest growing country being served from Yangon is Japan, which has grown by nearly 300 percent, when comparing data from 10-16 December in 2013 with the same week last year.

All Nippon Airways (ANA) has expanded hugely in the last 12 months, increasing its flights to Tokyo Narita Airport from thrice-weekly to daily. On the other hand, services to India have experienced the greatest capacity decrease (-52 percent), as a result of Myanmar Airways withdrawing its four weekly services to Gaya.

Thailand has managed to maintain its top position in 2013, increasing its seat offering by 38 percent. However, two new country markets have been added this year, Hong Kong and Bangladesh, although the latter did not make the top 12 ranking.

Hong Kong’s entry at No.11 position is due to Dragonair, which commenced serving Hong Kong in January last year with four weekly services, utilising its 172-seat A321s.

Since the start of 2013, Yangon has welcomed 13 new services from nine different airlines. Golden Myanmar (with four routes) and Nok Air (two) are the only carriers that have launched more than one service in 2013.

Out of the 13 new services, five are domestic, with Mandalay being the most frequently added domestic airport, as a result of Golden Myanmar’s daily services and Myanmar Airways’ thrice-weekly services. 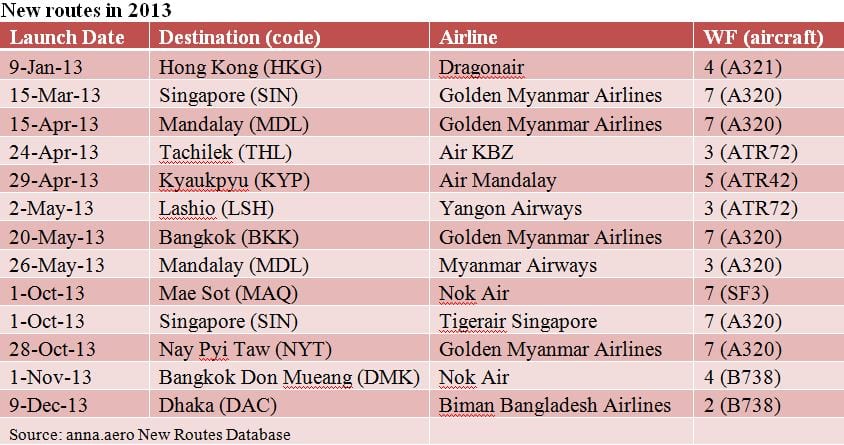