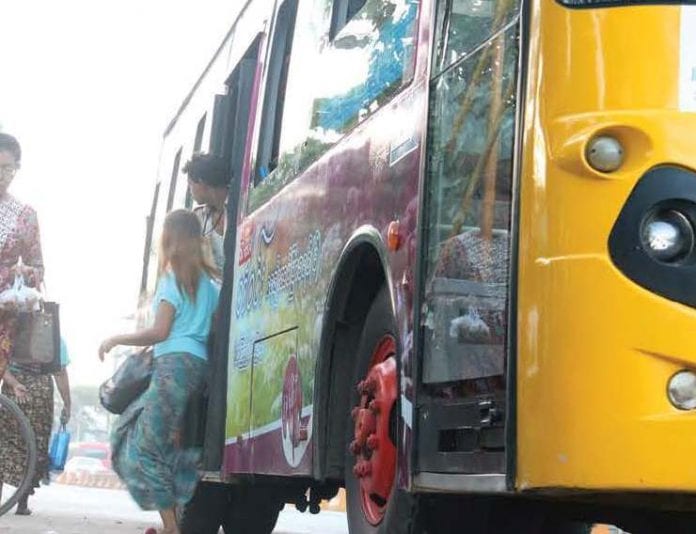 The plan to transform the independent bus lines running in Yangon to a unified, publicly traded company will be implemented in three to six months from now, said Dr Maung Maung, an advisor to the Ministry of Commerce.

The announcement was made at a press conference after the workshop regarding the issue at the Commerce Office in Yangon.

“In other countries [the public transportation] is handled by public companies. Buses don’t race each other to compete for business. The companies guarantee the workers’ families well-being through set salaries so that they can drive safely,” he said.

However, the task of incorporating a public company requires time, stakeholders say.

“Traffic jams in Yangon are caused not only by buses. Irresponsible private vehicles and taxis are also to be blamed. It is true that buses are racing each other to get more passengers. Even with rising prices in Yangon, bus fares have not been raised. They should consider making bus fares reflect the present prices,” said a bus owner from the No.105 bus line.

But commuters also complain that most of the buses running in Yangon ask for higher fares than the standards set by Ma Hta Tha, the supervisory committee for motor vehicles.

“There are almost no buses that accept K50, which is the lowest standard fare for short distances,” said one commuter.

Incorporating a public company will not solve the problems and continuous development plans, so systematic feasibility surveys need to be prepared, said U Win Aung, chair of Union of Myanmar Federation of Chambers of Commerce and Industry (UMFCCI).

Many bus owners are against the plan as they view the incorporation of many bus lines with numerous bus owners into a single system can create obstacles to the current operations.

The government’s recent method of placing concrete blocks to separate the rightmost lane of the downtown roads as bus lanes will provide short-term solution but can cause complications in the long term as broken busses can obstruct the lane for a long time, a transportation staff from the Western District Bus Division said.

According to Ma Hta Tha’s statistics, over 6,500 buses from over 350 bus lines are running on 17 routes in the Yangon region, transporting over 2.3 million commuters every day.