Yangon Buses to Shift to ‘Only-Right’ 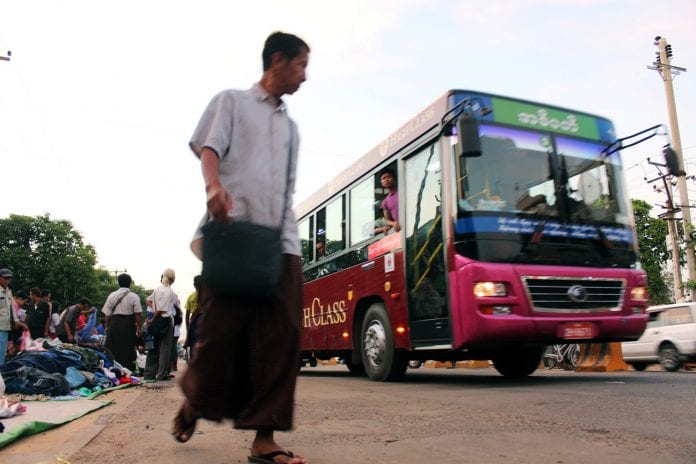 The Yangon Regional Government is planning to impose a ‘right-hand-lane only’ system for the bus lines in Myanmar’s commercial hub that is plagued by gridlocks, an official said.

A ‘right-hand-lane only’ system would mean that buses will not be allowed to run on any other lanes except for the rightmost lanes on Yangon roads.

“We have started the preparation and the regional government has already been given instructions. We will provide trainings on required rules and regulations as much as possible,” said U Hla Aung, chairman of Yangon Region’s public transport regulatory body MaHtaTha.

The initial implementation of the system will be carried out in six townships in downtown Yangon, where traffic congestion is the heaviest. This will be expanded to other townships in steps, he said.

U Hla Aung said the new system will reduce travel time and help lessen the severe traffic jams in Yangon, adding that it will also help the authorities to take actions against buses that violate rules and cause jams.

However, bus drivers weren’t happy about the authorities’ plans. “When they impose this system, how are we going to take passengers? We cannot make money without competing with other buses,” a bus driver from Myittar bus line told Myanmar Business Today.

“[They] announce this type of regulations often, but I don’t think it will solve the [traffic] problem,” he added.

During October 1 to 15, 29 passengers were injured and two died because of bus accidents in Yangon. Over 2.3 million passengers use public transport in the country's largest city.

A total of 366 bus lines run around the city with over 6,500 vehicles on 17 routes, according to MaHtaTha.